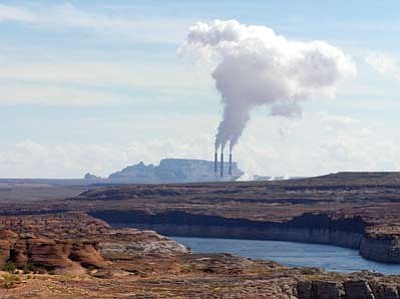 Under the proposal one of the three units will be shut down. In exchange the owners would get until 2030 to install selective catalytic reduction scrubbers on the other two units.

Grant Smedley, manager of environmental policy and innovation at NGS, said although he and the plant owners had not had a chance to study the response about their alternative proposal from the EPA in detail, they are optimistic about what they have seen so far.

"We obviously had to read through it pretty quick but certainly our read thus far, we are very encouraged that they appear to adopt it in large part...definitely an encouraging development for NGS," Smedley said.

The EPA's decision comes as a recent report by Environment America, an advocacy group dedicated to protecting air, water and open spaces, characterized NGS as one of the top 10 dirty plants in the nation.

Smedley said the report is misleading.

"It really characterizes the dirtiest power plants just by the amount of carbon dioxide (CO2) emissions they are responsible for and there's a lot more to it than that," Smedley said.

He said many of the power plants listed in the report are also the largest power plants in the country. Those plants produce the most power and many of those plants are equipped with advanced emission controls for emissions of other pollutants that EPA regulates.

"We acknowledge that NGS is responsible for a

large amount of C02 emissions but it is also a large power plant and very important to the state," Smedley said.

He added if the total amount of CO2 emitted per unit of fuel burned at the plant is taken into account, then NGS is a very efficient power plant. Smedley said even though it ranks quite high when talking about carbon dioxide emissions, it would rank above hundreds of other power plants in terms of efficiency.

"The report almost implies, if you replaced those 50 dirtiest power plants with 100 smaller plants that it would somehow be better," Smedley said. "Quite frankly, if you replaced NGS with two smaller power plants, it's likely that those plants would actually emit more CO2 emissions just because NGS is so efficient."

Darrell Kaufman, regents' professor for the school of earth sciences and environmental sustainability at Northern Arizona University, agrees that carbon dioxide is important and naturally occurring.

Still Kaufman says it is not harmless.

"The bottom line is that climate changes naturally without humans for a number of good reasons that we understand," Kaufman said. "There's no question that carbon dioxide is a greenhouse gas and the content of carbon dioxide in the atmosphere has increased dramatically since humans began burning fossil fuels."

NGS was built with equipment to reduce particulate matter emissions, called electrostatic precipitators, which controls more than 99 percent of the particulate emissions coming from the stack.

In the late 1990s, the plant's owners installed low oxide scrubbers because of a settlement to address visibility.

And as part of another settlement, in 2009-2011, NGS owners installed technology to reduce nitrogen oxide (NOx) emissions.

Smedley said while he acknowledges that Environment America reported emissions based on available data, he wonders what the U.S. will ultimately do about the plants that are considered dirty.

"If you were to shut them all down today, you would have to find a way to supply all of that power in a manner that's reliable," Smedley said. "It's one thing to report it and certainly there is value there but maybe that is the tougher question."

Kaufman said there are ways to reduce the amount of carbon dioxide emitted from power plants. Two of those would be to neutralize the carbon dioxide into a mineral solid form or inject it into the ground as a gas.

"It's a matter of capturing it so that you can then store it in places that would be less harmful in the atmosphere where it contributes to the greenhouse effect," Kaufman said.

Navajo Nation President Ben Shelly recently traveled to Alabama to tour a national carbon capture center in search of some of those solutions.

The National Carbon Capture Center began in 2008 and is funded through U.S. Department of Energy grants and private funding. It conducts research on methods of carbon capture and pre-combustion removal of carbon from coal-fire generation.

"We know there is technology available out there to power our future with clean coal," Shelly said.

He also toured a plant operated by Southern Company, a power company in the southeast that is building the first approved coal-fire generating power plant using carbon capture and emitting zero carbon. The plant is expected to be working in May 2014 and produce 880 megawatts of power.

"We are exploring ways that Congress has funded clean coal technology for future use of our vast coal supply," said Shelly. "With projects like these in the southeast, the federal government is supporting carbon capture coal burning plants with $8 billion in new loan guarantees for projects using this technology."

Navajo Nation officials have expressed concern over the rapid implementation of federal rules aimed at coal-fired plants while they have sought solutions for cleaner energy and revenue generating options.

In 2012, the Nation received $53.6 million in gross revenue from coal. The technical working group's alternative proposal to shut down one unit at NGS will affect that income.

The public will have five opportunities to attend open houses and public hearings in Arizona during the week of November 12.

There three proposals are open for comment through January 6, 2014. More information is available at http://www.epa.gov/region9/air/navajo/index.html.