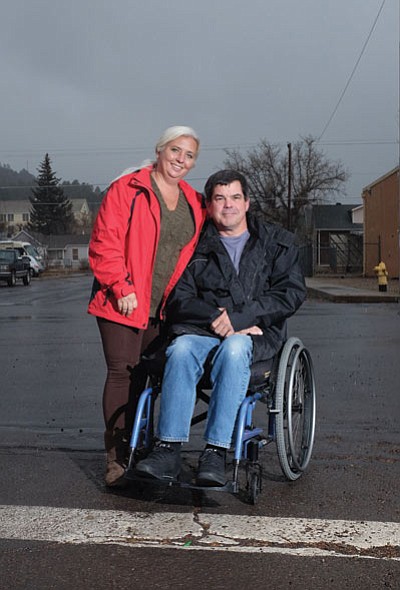 With the arrival of winter weather, the new managers at Elk Ridge Ski Area have big plans for the upcoming ski season.

Jim Gratton and Mica Doucette of Flagstaff have managed Elk Ridge since the middle of last year's ski season. When they aren't working at the ski area, Gratton works for Century Link as the outside plant supervisor for Northern Arizona and Doucette works at Lowell Observatory as a fundraiser.

Gratton started working at Elk Ridge four ski seasons ago running the lodge and the restaurant. Over the years he became more and more involved in the operations of the ski area until he became the manager. Doucette got involved through Gratton, who is her fiancé.

"We kind of label it as the ultimate beginner hill, because it's very intimate, it's very friendly," Gratton said.

Staff has been preparing for the ski season by clearing downed trees from the runs, re-conditioning the roads and completing general maintenance. Workers have also done some remodeling in the lodge and rental room.

Elk Ridge offers a rope tow to transport skiers and snowboarders, and Gratton and Doucette also hope to have the surface Poma lift operating this season for the first time in seven years.

Gratton described the lift as, "a cabled line that has a pole that has a spring inside of it and a disk that you actually kind of sit on or rest on, and it tows you up the surface of the mountain."

A lack of maintenance caused the Poma lift to need about two years of repairs. The use of the Poma lift for this season will depend on a Forest Service inspection scheduled for Dec. 7.

The ski area's 200-foot long tube hill will be open the first weekend in December, regardless of snowfall.

"It's on artificial turf," Gratton explained. "With the rain and the plastic (bottomed tubes) it's pretty slick."

When skiers and snowboarders aren't on the slopes, Gratton said they can take a break in the ski lodge. The lodge has a fireplace, games and puzzles, as well as a restaurant that serves food like hamburgers, hotdogs and chicken strips. Elk Ridge also offers ski and snowboard rentals and lessons.

If the ski area has a successful winter season, Gratton and Doucette hope to possibly offer more activities there during the summer. Potential options that would require Forest Service approval include Frisbee golf, a putt putt golf course, a jungle gym and paint ball. Staff can also open the tube run in the summer with water.

But for right now, the new owners are focused on winter. Gratton described Elk Ridge as a mom-and-pop ski area.

"We have a lot of people that come up from the Valley and locally that learned to ski there years and years ago, and we want them to come back and try us again," he said. "There's another alternative to skiing in northern Arizona."

Gratton said his goal for this season is "to have people come up to have a good time to enjoy themselves."

"We want the city of Williams to be proud of the ski area," he said.

Elk Ridge Ski Area is at 2467 County Road 73. More information is available at (928) 814-5038. Road and ski conditions are available at www.elkridgeski.com or on Elk Ridge's Facebook page.