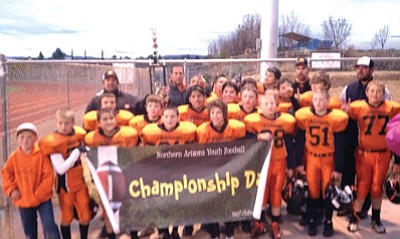 After a long four-month season from the start of practice in August to the championship, The Bengals earned the right to face Bagdad in the championship game in what turned out to be a nail biter, beating Bagdad by five points to earn the title. The Bengals ended their season with an 11-0 record.

Head Coach Travis Grantham said that despite the cold and rainy conditions, the Bengals had a good, competitive, offensive game.

"We scored, we kept scoring, they scored, it just went back and forth the whole game," Grantham said. "Half-time we were only up by five."

Grantham credits the offensive line with doing a good job, mentioning Gabriel John and Andrew Armijo with keeping the team in the game.

"We had an explosive offense. That's the only way we won the game, keep scoring," Grantham said. "We had a really good game on the offensive line, [they] opened holes for Dorrian (Ayala)."

Ayala was the Bengals' main runner and ran for five touchdowns.

Zane Grantham, the quarterback, directed the team and kept the Bengals where they needed to be.

Every time the Bengals scored, Bagdad answered, with a good offense of their own.

"They had a really good passing attack, that's how they scored most of their touchdowns, on their passes," Grantham said.

Grantham said the defense played well but had some problems dealing with Bagdad's passing game.

"They had a good, little quarterback who moved around a lot and had a really good arm," Grantham said. "We weren't used to too many teams passing, half their offense is passing."

He added, "They were definitely a good team."

The game went down to the last minutes and Grantham said the outcome could have gone either way. In the fourth quarter while Ayala suffered some pretty bad cramps, the team struggled to move the ball and Bagdad stopped the Bengals from scoring a couple of times.

With only a five-point lead the Bengals had to hold Bagdad, who had the ball, at the Bengals 35 yard line with only a minute and a half left.

"If they had scored, they probably would have won the game," Grantham said. "It's definitely an exciting time for these boys, it's very competitive, it's well organized. Throughout the season we won, that was our fifth game that we won by a touchdown or less, we had plenty of competition throughout the year."

He added, "Being able to have that grit, toughness to stay in the game, we were behind in a few games," Grantham said. "In any level of sport to be undefeated throughout a whole season is big."

The Bengals will lose six older players for next season but Grantham said the team will adjust.

"It'll make a big difference in our season but we will have a lot of younger kids staying," Grantham said, adding that they will have about six new players from the younger team coming up.

Grantham said he wanted to thank the city of Williams and the support they receive is important.

"I really want to recognize them and recognize the community for helping us, the sponsorships are big, they make our season," Grantham said.