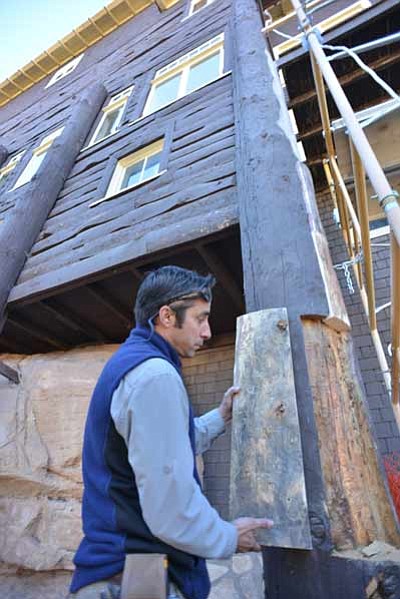 GRAND CANYON, Ariz. - Kolb Studio is getting a massive facelift, thanks to donations from both private and public donors.

The studio is going through several phases of restoration work, which will happen over the next few years at a cost of around $440,000.

"This is a crown jewel to the Park Service, and to the Grand Canyon Association (GCA). There's no other building like it in existence," GCA Facilities Manager Chris Maragos said.

A National Park Service (NPS) Historic Preservation crew of five has been working on replacing parts of the building that can no longer be saved. The work includes replacing weatherworn shingles and exterior siding.

"I think there are about 80 windows in the building that are individually being gone through and painstakingly replacing the glazing materials, which is like a putty that holds the window pane in place," Maragos said.

Along with the siding and windows, Maragos said crews are working on two Canyon-facing porches that have been exposed to the elements, causing rotting and deterioration.

"In historic preservation you have to only take out what you can't save," said Greg Dodson, NPS Western Center for Historic Preservation Project manager. "It's all about saving the historic fabric, and then we document everything we do so people in the future can say, 'this is original, or this is a replacement.'"

Outside the building, the Park Service is currently analyzing Kolb's retaining walls, which take visitors down from the rim to the entrance of the studio. Crews plan to start rebuilding the walls next year.

"Those retaining walls, over time, are starting to fail," Maragos said. "They are considered a historic element to the building so just as much as the building is historic, the features are also historic."

Maragos said next year, when the weather warms up, crews will focus on painting the exterior of the building, including the windows and replacing gutters.

Built in 1904, Kolb Studio was the site of the legendary Kolb brothers' photography studio where they captured early tourists on treks into Grand Canyon. Later, the owners expanded the house to include a theater and the family residence until Emery Kolb's death in 1976 when the building came under National Park Service ownership.

As a historic building, the GCA took stewardship of the building and it is now an integral part of the visitor experience at Grand Canyon, housing a GCA bookstore and a gallery for rotating free exhibits.