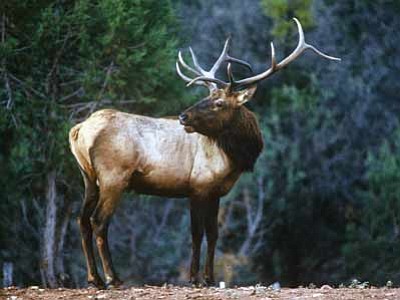 Arizona officials are slamming the U.S. Forest Service over a regulation making trailers subject to impoundment or citation if left unattended for more than 72 hours in northern Arizona national forests.

Calling the move unprecedented, the Arizona Game and Fish Commission and Department contend that the regulation hurts hunters, anglers and other recreational users.

"This has been real disruptive to hunters and citizens who are trying to obey the law," said Jim Paxon, chief of information for Game and Fish.

A Coconino National Forest news release dated Aug. 16 and titled "Parking trailers in forests prohibited during hunting season" said that many hunters have parked trailers in forests to reserve locations for the season and to avoid hauling them back and forth.

"If trailers are left unattended for more than 72 hours, the Forest Service considers them abandoned property and may remove them from the forest," the release said. "Violators can also be cited for this action."

The release said the regulation applies to all national forests in northern Arizona.

Paxon said state officials learned that regulation doesn't apply in the Apache-Sitgreaves, Tonto and Coronado national forests. There, he said, trailers can park for 14 days, as has been the rule for decades.

Paxon said the commission and the Coconino and Yavapai county sheriff's offices have tried several times without success to get the Forest Service to rescind the regulation.

Asked whether his agency has heard of hunters receiving citations or having trailers towed, Paxon said that was a question for the Forest Service.

Larry Voyles, director of the Arizona Game and Fish Commission and Department, sent a letter Sept. 13 to Earl Stewart, supervisor of the Coconino National Forest, questioning why the regulation only applies to some of Arizona's national forests. He requested that the agency return to a policy limiting trailers to 14 days.

"Creating an enforcement philosophy that applies to half the forests in Arizona creates a level of confusion among our customers," Voyles said.

Noting that most of his agency's revenue for wildlife conservation comes from licenses and permits, Voyles said the regulation risks alienating hunters and anglers.

"A situation where a person may be cited, or have their equipment impounded, creates a scenario where a hunter may simply choose not to spend the money and time to participate," Voyles said.

The Coconino National Forest's public affairs office directed a reporter to Cathie Schmidlin, a regional spokeswoman for the Forest Service who emailed a statement saying that the agency's law enforcement officers make "every effort" to contact hunters before taking action.

"They know that hunters often leave before sunrise and return after dark," the statement said. "They have the discretion to address potential action on a case-by-case basis. Officers will leave a red tag with time and date in an inconspicuous place with the officer's name and phone number and request that they be contacted to confirm the property is not abandoned."

The statement said the regulation is in line with a state law stating that a vehicle left more than 72 hours with no indication to the contrary may be considered abandoned.

Steve Clark, executive director of the Arizona Elk Society, said he thinks northern Arizona forests were targeted because they have the most and largest hunting camps. He said he's heard about friends receiving warnings and having trailers impounded in the Kaibab National Forest this year.

"I firmly believe that this is discrimination against the hunting community," Clark said.