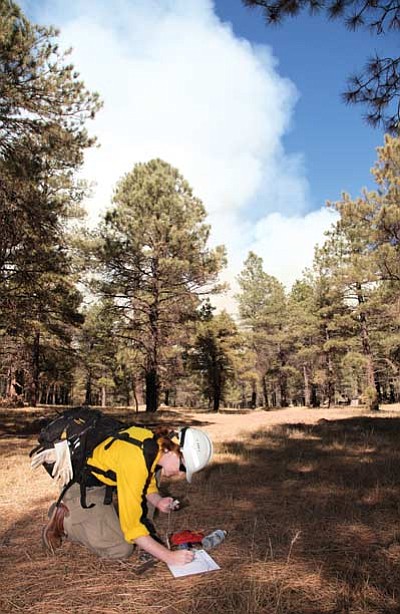 Long before people started living in the western part of the United States, lightning fires naturally occurred in the forests every few years.

When people started settling in the area, they began suppressing those fires to protect their resources, said Holly Krake, fire information officer for the Kaibab National Forest.

"When you take something out of the natural ecosystem that is a fundamental part of its health and existence, you're shifting things in an unhealthy balance," Krake said. "Fire is a healthy thing and a necessary thing."

So since around the late 1980s, the U.S. Forest Service has used prescribed fire to reduce forest ground litter and the density of the trees, which helps prevent catastrophic wildfires.

Last week, the Forest Service carried out a prescribed burn on 539 acres in the Cougar Park area of the McCracken project south of Williams.

On the morning of the burn, everyone involved met to go over an action plan. Then Forest Service workers started a small test fire, in this case about three acres in size.

After officials determined that the test fire was effective, they started lighting the rest of the burn area. A firing crew walked in a grid pattern with drip torches to light the fire.

"The idea is the fire will meet in the middle," Krake said. "So it's a very effective way to cover a large amount of acreage."

Two quads with drip torches also helped light this particular fire. A holding team equipped with water made sure the fire didn't burn outside the planned area.

Once the prescribed burn is complete, the burned area will act as a buffer for the city's watershed in case a lightning-caused fire was moving in that direction.

The McCracken Cougar Park fire is part of a maximum of 13,000 acres of prescribed fire planned for the Williams Ranger District this fall. As of last week, the Forest Service had burned about 1,536 acres so far. The prescribed burn season usually lasts from September through the end of November.

The Forest Service divided the 13,000 acres into 13 burn areas so that if conditions aren't right to burn in one area, they may be in another area.

Officials determine which areas to burn based on the previous fire history in the area, the amount of dead and down material in that area of the forest, and the proximity of the area to private property or areas like watersheds.

Before the Forest Service can start a prescribed fire, officials must get approval from the Arizona Department of Environmental Quality regarding the smoke impacts.

The Forest Service must also determine if the fuel moistures in that area fall within a certain range to make sure a low to moderate fire will have the desired impact.

If the fuel moisture is too high, the fire may burn off some pine needles but not raise the crown heights on the trees. Raising the crown heights prevents a wildfire from jumping into the crown of the tree and moving independently from the ground fire.

During the McCracken Cougar Park fire, Krake recorded the wind speed, wind direction, and relative humidity in the area as part of an hourly update for the crew.

"If at any point we get outside of our window of what we've been approved for then we cut it off, no ifs ands or buts," she said. "When they call it fire science, it really is a scientific kind of art that there's a lot of factors that play into that."

"For the most part nobody enjoys smoke, but I think there's a pretty good consensus that it's a tradeoff for having a healthy forest and for minimizing the risk to their private property," Krake said.

In the days after a prescribed fire is set, crews go out to the burn area on a daily basis to make sure the fire doesn't go outside the planned area until it is out.

"When we put fire on the ground we really want to make sure that if we're going to burn this that it's going to be what is right for that area both ecologically and public safety wise," Krake said.