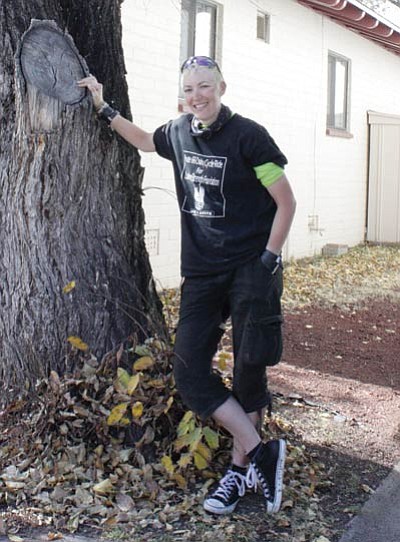 Lydia Franklin takes a break in Williams from her Route 66 cycling trip to raise awareness for the bone marrow registry. Marissa Freireich/WGCN

Last month, cyclist Lydia Franklin rode her bike across Route 66 to raise awareness for the Love Hope Strength Foundation, which signs people up for the bone marrow registry at rock concerts in the United Kingdom, United States and Australia.

Franklin, who lives in the United Kingdom, flew to the United States on Oct. 4 and started her trip the next day from Chicago. She cycled about 100 miles per day, and ended in Santa Monica Oct. 31.

Franklin stopped in Williams on Oct. 25 to talk about her trip and the Love Hope Strength Foundation. Mike Peters, front man for the Welsh band The Alarm, and James Chippendale, founder of CSI Entertainment Insurance, founded Love Hope Strength in 2007 after both battled cancer.

Since members of the organization began swabbing people in the United Kingdom in February, Franklin estimates they've added more than 3,000 people to the bone marrow donor list.

The idea for Franklin's Route 66 trip started about a year ago after she cycled about 500 miles from Snowdon in Wales to Ben Nevis in Scotland, since Love Hope Strength organized fundraising climbs at both mountains.

"There's a gig at the end and I was speaking to someone and they were like, 'What are you doing next?' And I'm like, 'Well, I don't know, maybe across America,' joking, and by the end of the evening plans had been made," Franklin said.

Originally a friend had planned to join Franklin, but when he couldn't make it, Franklin decided to do the trip anyway.

Throughout her journey across Route 66, Franklin faced cold temperatures in the Texas panhandle and strong winds in New Mexico.

"It's been far more emotional than I thought," she said. "I'm not given to emotion, but lots of times I've been so relieved that I've gotten somewhere or a landmark point."

One of the more memorable moments of Franklin's trip came when she stopped at the Geronimo Trading Post, where the "World's Largest Petrified Tree" is located.

"I was chatting to them about the charity and I just stopped, because on the radio there was a song called 'Rockin' in the Free World,' which The Alarm did, and it all just coincided," she said. "It sent chills down my spine, it was so weird."

While in Williams, Franklin said Arizona and New Mexico were her favorite states she traveled through. She called the Painted Desert "unbelievable," and was looking forward to visiting the Grand Canyon the following day.

Franklin said that numerous friendly people she met on her trip made it a good one.

"It's been incredibly tough with the worst lows you could possibly imagine, but then the next minute there's just an unbelievable high just around the corner," she said. "It's been an amazing journey."