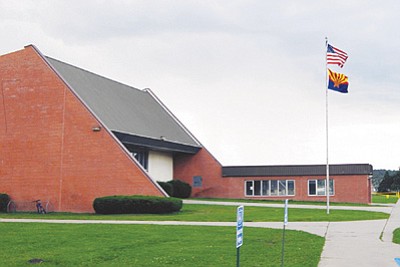 After a 26-year career with DPS, Brownlee recently retired. This school year he began teaching the World of Work class to eighth graders and the Law and Safety class to high school students in Williams. Brownlee also coaches football and basketball at the high school.

As the SRO, Brownlee will provide added safety at the schools, as well as develop positive relationships with students.

WUSD Business Manager Melissa Ellico said Brownlee will do a great job as the SRO.

"He has a wonderful rapport with the children," she said. "He has a lot of experience he's bringing towards this. And all the kids really appreciate his information and what he brings to the table."

This week Brownlee is completing a four-day training in Phoenix for his new role as SRO. Because of the training, Brownlee was unavailable for comment at press time.

Williams Police Chief Herman Nixon said he's looking forward to having an officer in the schools.

"It's just another positive thing for the police department and for the community," Nixon said. "(Brownlee) wants the job, he's excited about it."

WUSD received a grant to pay for the SRO for this school year after the Arizona legislature allocated an additional $2 million for school safety programs. The grant will pay for the SRO's salary and benefits, which is about $27,270 for 26 weeks.

Besides the safety component, the grant also requires that the SRO provide 90 hours of law enforcement education, which Nixon said could include teaching students about arrest procedures and Fourth Amendment rights. Brownlee will work 40 hours per week through the end of the school year in May.

"It's great to have a law enforcement presence at the school," Ellico said. "It helps the kids know that it's important to be safe. It also helps us deal with little issues before they become big issues."

Before this year, WUSD had not received the school resource officer grant since the 2010-2011 school year because of a decrease in state funding.

"We're just really excited about this opportunity," Ellico said. "We're glad that the state allocated the money to be able to put officers back in the schools and help keep our kids safe."