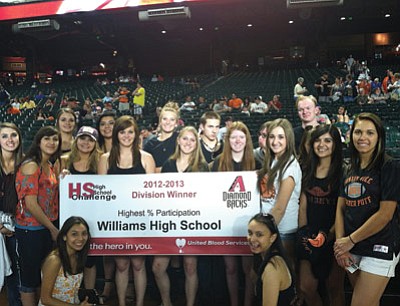 "It's based off the number of seniors," said junior Miranda Mann. "If we have 48 seniors and we get 48 donors then we have 100 percent."

"So it helps that we're a small school cause then it makes it a lot easier and we get to beat really big schools," Mann said. "But still we do really well."

As a reward for getting the highest percentage participation, Williams students got to sit in a party suite at the May 1 Arizona Diamondbacks game.

"We got to go out on the field before the game and they showed us on the big screen and announced what we had won," Mann said.

Nineteen students went on the trip, all of whom had donated blood or helped organize the blood drive. The students got free food and drinks.

They also got to talk with a young girl who has benefited from blood transfusions.

The students said going to the baseball game was a blast.

"It was just a chance to go out and have fun and not be in school," sophomore Stephanie Wamble said.

The students said that giving blood is the cool thing to do.

"It sort of proves that you're an upperclassman," said senior Bayleigh Preston.

WHS has been doing blood drives for more than 15 years. The student council organizes the blood drive.

"It gives the students around here a chance to say I did something good," said Wamble.

The students call and email community members and put up posters around town to get people to donate. Family members of the students often help donate also.

The students hope the community will support their next blood drive July 22 and 23.

"After you donate blood, you just sort of feel good about yourself, because you are saving three lives," Preston said. "So you just feel like a hero."