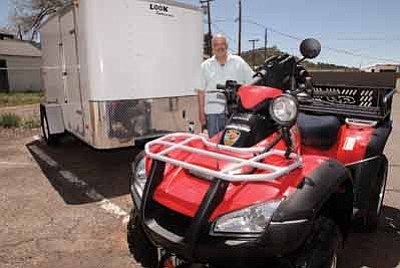 Michael DiMuria, a dispatcher and grant writer for Williams Police Department, shows off the department’s new ATV and trailer paid for with grant money. Ryan Williams/WGCN

Williams Police Department (WPD) officers will be able to patrol more remote areas with a new All Terrain Vehicle (ATV) paid for with grant money.

WPD applied for a federally funded Arizona State Department of Homeland Security grant about eight months ago, and officials approved the grant about two months ago.

The $13,000 grant paid for the ATV and a trailer, according to Lieutenant Darrell Hixson. The police department has had the vehicles since May 13. WPD does not have any other ATVs, and officers will need to be certified to drive the vehicle.

The police department will use the ATV for patrolling outlying areas such as Perkinsville, BNSF rail lines and the gas line on Airport Road, Hixson said.

"We can check some off roads that we normally wouldn't do with the patrol cars," he said. "It's going to be a nice utility vehicle for us."