Run for the Wall makes annual stop in Williams
American Legion Cordova Post No. 13 feeds hundreds of motorcycle riders on their way to Vietnam Veterans Memorial in Washington D.C. 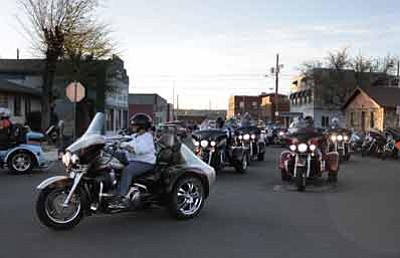 Run for the Wall riders drive down Third Street in Williams May 15. Marissa Freireich/WGCN

Hundreds of motorcycles rolled into Williams last Wednesday as part of the 25th annual Run for the Wall motorcycle rally.

Run for the Wall started its 10-day journey May 15 in Rancho Cucamonga, Calif. More and more motorcyclists join each day as the group rides across the country to the Vietnam Veterans Memorial. The group will arrive in Washington D.C. on Friday.

The mission of the run is to help veterans heal, gain accountability for prisoners of war and the missing in action, honor and respect those killed in action and support members of the military.

The American Legion Cordova Post No. 13 prepared dinner for the riders on their stopover in Williams. Volunteers started preparing three days before the event.

They cooked and served 400 pounds of meat for the dinner, according to Rodger Ely, the post's adjutant. The Ladies Auxiliary prepared desserts.

"That's a big undertaking," Ely said. "These guys just do it out of the goodness of their heart."

This was the 13th year that the Legion has hosted Run for the Wall participants. Ely, who served in the Marines in Vietnam, said putting on the dinner makes the post members feel good.

"That's part of our creed-to support veterans by veterans. When they come through here on their pilgrimage, we're assuming that they realize that we're all veterans too."

The Legion thanked Commander Horatio Ortiz, Eddie Aguilar, chef Mel Berry from Best Western, and Guy and Angie Mikkelsen of the Food Bank for their support.

The Legion also got some support from outside of Williams. Bill Magby and Kathy Claassen, owners of Five Star Thrift Store in Chino Valley, donated about $600 for the event. They have supported the event for three years, but this was the first time they attended to help out. Magby is a Vietnam veteran and he and Claassen are members of the American Legion in Chino Valley.

"It's all about supporting the troops, supporting what the heck's been going on and supporting the guys that are coming back-the support we didn't get when we came back," Magby said.

And the riders appreciate the support they received in Williams, as well as the dinner.

"It's absolutely amazing that the American Legion puts on this huge meal free of cost for everyone that shows up, no matter how many people there are," said Tom "Two Tone" Lystrup, who was on his first Run for the Wall.

Newcomers like Lystrup wear pins with the letters FNG, meaning "friendly new guy," so experienced riders can look out for them. Lystrup, who is from Ridgecrest, Calif., is a Vietnam era veteran.

During the run from Ludlow to Needles, Calif. Lystrup rode in the missing man formation. The position is directly behind the route coordinator and assistant.

"I rode as the missing man escort, so I rode by myself, with nobody next to me," he said. "Every leg of this trip all the way to D.C. there is a missing man formation, for somebody who's representing someone that was near and dear to them."

Lystrup rode for his father, Elwood "Woody." Elwood served as a gunner's mate on the battleship USS Colorado in search of Amelia Earhart.

"She was a national hero, and everybody knew her, everybody loved her. And for my dad in particular, it was really hard," Lystrup said. "Everybody on the ship was all broken up about it that they couldn't find anything."

Elwood died in 1999. Lystrup called riding in the missing man formation for his father an honor and a privilege.

This will be Lystrup's first time visiting the Vietnam Veterans Memorial.

"I feel that I owe it to those whose names are on the wall to show up and provide my respect," he said.

Rich Harrison of Manhattan, Kan. has seen the power of the wall firsthand.

Harrison, who served in the Navy during Vietnam, is on his 18th run. He told the story of when a rider named "Guns" visited the Vietnam Memorial during a special night run for those who have lost members of their squad.

"So he's up there touching the wall's names in his squad, he got shot up too...He kind of steps back and somebody touches him from behind on the shoulder. He turns around, and it's the nurse that had attended to his wounds over in Vietnam," he said. "She was there for the same reason, because she knew where she lost those people."

Another memorable moment for Harrison was when he served as the Kansas coordinator for Run for the Wall. During a lunch stop, a couple asked one of the riders to take something to the wall and place it at the panel where their son's name is written.

"The next year we came through he was there again. He saw them. He says, 'what's your address? I took a picture of me setting that on that panel. I want to send it to you.' Tears rolled down their eyes," he said. "It's that closure that says, hey, remember and honor and respect."

Closure is also an important part of the run for a woman who goes by the road name "Lil Boss." Lil Boss, whose husband was a Vietnam era veteran, started going on the run in 1989.

"It was hard for a lot of us to grow up watching that. It felt like the war was in our living room, but yet we were so far removed from it," she said. "And for a lot of us, being able to go to the wall and meet with the vets and interact with them and thank them-it brings some closure for us too, because there was an entire generation that was affected by that war."

Lil Boss has taken her four children on the run, where they were able to escort a Vietnam veteran to the wall.

"Some of the vets showed up really closed up, wound up real tight, a lot of issues, and they just didn't want to deal with any of it but they knew they had to go. And there was just something about the kids," she said, adding that the experience helped educate her kids as well as heal the veterans.

Those healing relationships are also significant for Stan "Ironfish" Handley. Handley, a Vietnam veteran from Colville, Wash., did his first Run for the Wall in 2006.

"I was so deeply moved in the healing process that I was starting into just by being with these like-minded people, we've been in your shoes, we understand that kind of stuff, and the welcoming that I got-it's a family."

Handley is this year's Run for the Wall central route coordinator. The job entails about 11 months of preparation, including planning fueling stops, meals, and accommodations.

"It's a logistical hopscotch trying to get everything put into place," he said. "But once it's in place, it runs like a Swiss watch, it's great."

Handley's favorite part of the run is the people he meets. As the group continues its journey across the country, Handley hopes to make more people aware of prisoners of war and the missing in action.

"Those freedoms are all yours because those people haven't come home," he said. "They have given everything so that you could have this."