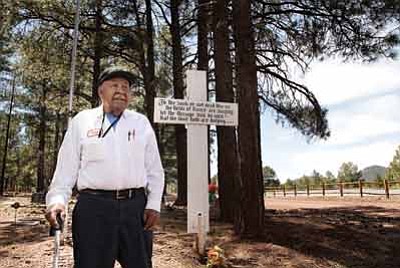 Perico Avila stands in front of the cross of the unknown soldier in the Williams Cemetery. Avila organizes the Memorial Day service that takes place Monday at 11 a.m. at the cemetery. Ryan Williams/WGCN

Williams will honor veterans this weekend with a parade and Memorial Day service.

Carla Lugo will be the Memorial Day Parade Grand Marshall.

"I am very proud that my family in Williams as well as Williams is wanting me to do that," Lugo said. "I'm very honored and grateful."

Lugo is from Williams, and is currently serving in the Army as a logistics readiness officer at March Air Reserve Base in California.

She graduated from Flagstaff High School in 1991 and joined the military in 1995.

"I just wanted to do my part as an American," she said.

Since then, Lugo has served in Kuwait, Turkey and Iraq. She will be deployed to Afghanistan in July.

Lugo's daughter and son-in-law, Stephanie and Raymond Delgado, also serve in the military at Holloman Air Force Base in New Mexico. Stephanie and her son will join Lugo in Williams for the Memorial Day weekend festivities.

Raymond is currently deployed to Afghanistan. Lugo will be putting together a box to send to Raymond and the rest of his 12-person team over the weekend. She is accepting donations of candy, jerky, reading material, crossword puzzles and other items.

Besides being the Grand Marshall in the parade, Lugo will speak at the Memorial Day service on Monday. She plans to talk about her time in the military and what Memorial Day means to her.

"Memorial weekend is a snapshot in time where we give thanks to our military, regardless if they're active duty or reserve or regardless of their branch," she said.

Perico Avila of the American Legion is organizing the Memorial Day service at the Williams Cemetery on Monday at 11 a.m.

"They do it to honor all the veterans that have lost their lives in the Civil War and World War I and II, and down the line," he said. "The ones that gave their lives to have the freedom that we have now."

The service will include speeches by Lugo and a local minister, singers, Lu Carle playing taps and a firing squad.

"Everybody pitches in, and we just want to make it a good organized thing," Avila said.

The service will take place at the unknown soldier's white cross. Avila, who served during the Korean conflict, maintains the cross by painting it and doing the lettering.

On Sunday volunteers will put American flags at the graves of all the veterans. Avila estimates there are about 200.

"We don't want them to think we forget the veterans," Avila said. "To honor them is the main thing."