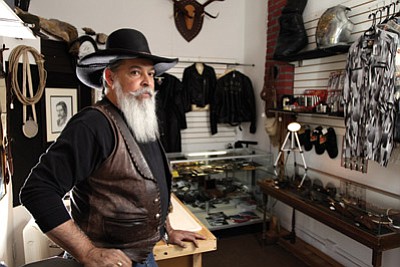 According to Jay Redfeather, bikers and cowboys are pretty similar. That's why he named his new retail store in downtown Williams Open Road Cowboy.

The shop is located at 305 W. Route 66 in what was once the Sultana Theater ticket booth.

"I wanted a combo of cowboy and biker stuff because the two groups are a lot alike, they just won't admit it," Redfeather said.

Redfeather is an artist who works with leather, canvas, metal and wood among other mediums. He creates new leather items that look and feel like they are straight out of the 1880s.

Actors have worn Redfeather's work in episodes of HBO's "Deadwood" and motion pictures including "Shanghai Noon" with Jackie Chan. Ron Stein, aka Tupelo Flash, can often be seen donning Jay Redfeather garb on programs shown on the Outdoor Channel.

Redfeather handcrafts holsters, belts, and chaps - just about anything made out of leather. He is handy with a needle and thread as well, making buckskin shirts, jackets, pants and skirts.

"The store is basically my gallery to showcase my work," Redfeather said.

Even though the space is small, Redfeather keeps a workbench there.

"I can work on small things to tool and cut," he said.

Open Road Cowboy is open Wednesday-Friday in the evenings and all day most Saturdays.