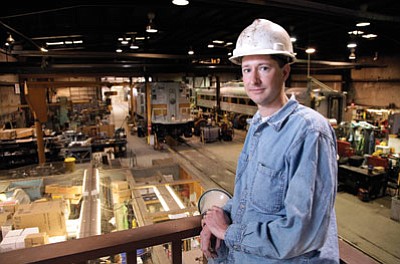 Diesel locomotive 6793 has an important job this Saturday for National Train Day. It will pull the Cataract Creek Rambler, which takes riders on 45-minute trips around Williams.

The 31 employees at the Grand Canyon Railway mechanical facility have an important job too - to keep locomotive 6793 and the other trains running smoothly.

According to Eric Hadder, locomotives manager for Grand Canyon Railway, maintaining locomotive 4960 is a big job, and involves "anything from replacing windshield

Every 90 days, the crew inspects the locomotive, changes filters, adjusts timing on the engine and lubricates parts. The crew replaces brake valves on an annual basis. When needed, mechanics can rebuild diesel engines, replace the drive motors and replace wheels.

Most of the train maintenance employees have experience with other mechanical jobs, such as working on cars and farm equipment.

"It's not that much different working on a train versus a car, except for the parts are bigger and the tools are bigger," Hadder said.

In the past, the steam locomotive 4960 pulled the Rambler, but this year the 1959 diesel locomotive 6793 will do the job.

"It's one that we used to run regularly but now we don't run it every day, so it's kind of unique, it's something that we don't get out a whole lot," Hadder said. "It's more historic than the ones we run normally."

National Train Day runs from 10 a.m. to 4 p.m. at the Grand Canyon Railway.

Those who ride the Cataract Creek Rambler can choose to sit in a green Pullman car or a stainless steel first class car. The Rambler leaves every hour on the hour.

Tours of the train maintenance shop will also be available for $5. Organizers will donate the money from the tours to the Williams Food Bank.

Besides trains, antique tractors, classic cars and motorcycles will also be on display at the event. Those interested in displaying a vehicle can contact the Williams-Grand Canyon Chamber of Commerce's Pimi Bennett at (928) 635-0273.

Amtrak started National Train Day in 2008. The day celebrates the day that workers laid the "golden spike," which completed the first transcontinental railroad on May 10, 1869, according to Grand Canyon Railway's website.

National Train Day will include a reenactment of this historic event.

Organizers encourage attendees to bring cans of food to donate to the Williams Food Bank.