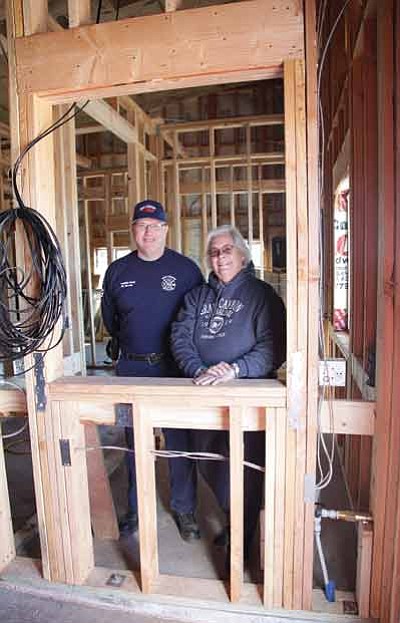 In a few weeks, High Country Fire Rescue (HCFR) volunteers will no longer have to take turns keeping fire trucks and supplies at their homes.

NextEra's Perrin Ranch Wind farm, located nearby, donated $500,000 to HCFR for land, planning, engineering and construction of a fire station to serve the rural area along Highway 64.

Construction started in October and HCFR Deputy Chief Robert Trotter hopes to have the building dedicated by the end of May. The station, built entirely by local contractors, will cost around $325,000.

"None of the subscription money goes in anyone's pockets," Trotter said. "It's either for equipment, Emergency Medical Service or training. I work 48 hours a week for LifeLine ambulance and I'm putting in 40 hours, or more, getting this (station) operational. I'm so proud of all our volunteers and how dedicated they are. They amaze me."

"I work just down the highway and to see them roll past the store with the engine is great," she said. "You know that they're out there and they're going to respond."

But that wasn't always the case. For years, area residents went without accessible emergency assistance. That all stopped when a group of residents decided to do something about it.

"Basically we had no one," Trotter said. "Williams (Fire Department) would come out, but only if they had enough people to man Williams' calls first. Junipine Fire Department isn't trained to cover anything but fire calls. When we first started, the need was basic Emergency Medical Technicians. It's 20 minutes from Williams, and if they're on another call, it could be 45 minutes before people got help."

And in just five years, HCFR expanded from one fire engine to five. The department's 18 volunteers serve from the Williams boundary, all the way to Valle, and along Highway 180 toward Flagstaff.

"Sometimes Tusayan (Fire Department) comes out (to Valle) depending who gets the call first, but if 911 gets the call, they'll call us," Trotter said.

Plans are already in the works to construct a small fire station in Valle after High Country's building is finished. Trotter said local residents are eager to volunteer and the Valle Airport has set aside an acre of land for a station.

"Everyone is very supportive of us," Trotter said.

"This is a community effort," Everts said. "It's important that the people who live out here and drive past this building know that it's here, and it's going to be operative very soon."

The station is located at 6593 High Country Lane on Highway 64 in Williams. Donations can be made by contacting (928) 635-9988 or by visiting www.highcountryfirerescue.org/.