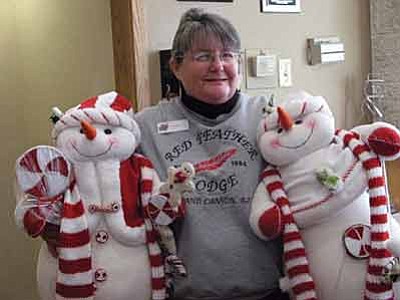 Erovick was preceded in death by her parents Stanford and Nancy Erovick, grandparents aunt and uncle OnnOlee and Bernard Slaten and uncle Bruce Noble.

Erovick was born December 12, 1958 in Longview, Washington and grew up in Vancouver, Washington. She graduated from Fort Vancouver High School in 1977 and Washington State University in 1987 with a degree in Animal Science.

She came to the Grand Canyon hoping to get a job working with the burros and horses that transport visitors into the Canyon. When that didn't happen, she worked in a variety of jobs ranging from housekeeping, travel agent, tour guide and front desk. She loved the canyon and spent her entire adult life here. At the time of her death, Erovick was a front desk clerk for the Red Feather Lodge. She enjoyed her friends and coworkers there. She will be greatly missed by the Red Feather Lodge team.

The family plans no service and her remains will be buried or scattered either near the Grand Canyon or the family plot in Molalla, Oregon. Memorials maybe sent to: American Diabetes Association, Humane Society, Local Food Bank or an organization promoting preservation of the Grand Canyon in lieu of flowers.

Many thanks go out to Julie and Andrew Aldaz, Clarinda Vail and Josh Collet. Their assistance and support was invaluable.

A small memorial service will take place for Erovick on April 4 at 4:30 p.m. at Shoshone Point, Grand Canyon. A reception and food will follow at the location. To keep car volume down by the highway, a carpool has been organized from Red Feather Lodge in Tusayan at 4 p.m. The hike to the point is about a quarter of a mile so walking shoes are encouraged.