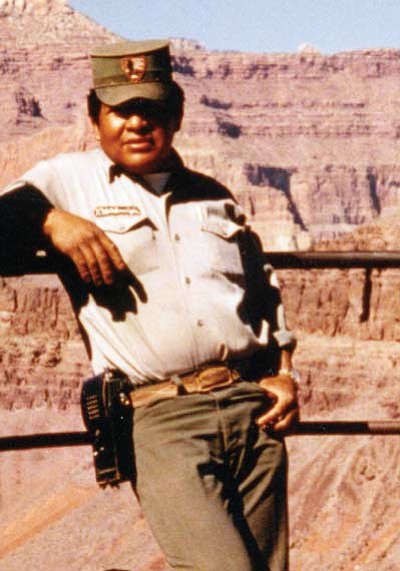 Victor P. Watahomigie, 70, of Grand Canyon, Ariz. left this world on February 24, 2013. He was born December 7, 1942 in Arizona, and was a lifelong resident of Grand Canyon Village. He graduated from Grand Canyon High School in 1961, where he excelled at sports, and he served in the U.S. Army, in Germany, from 1962-1965. He returned home to the Grand Canyon and worked for Fred Harvey Co. for two years. He married Rose Dixon in 1966, and worked as a Park Ranger in Indian Gardens until 1978. He returned to the top and worked at the water treatment plant until his retirement from the Park Service in 2007.

Victor will be remembered as an avid sports fan and for his great sense of humor. He remained a loyal Grand Canyon High School Phantom fan long after his three children graduated. Victor was an active member of the Havasupai tribe and regularly visited with relatives and friends in Supai. Victor had a way with words and bestowed many nicknames on his friends and family. He is survived by his wife Rose, his sister Anna, his daughters Diana and Iris (Spencer), niece Shana, nephew Nathaniel (Ginny) and granddaughters Ciara and Cheyenne. Victor will join his son Victor Jr., sister Rebecca, niece MistyBlue and parents Elmer and Josephine in the spirit world.

Victor had a great love of the Canyon and Supai and tremendous respect for his people, their culture and traditions and their land. He loved the pristine and quiet beauty of the Canyon.

He was quoted in a July 1977 Newsweek Magazine article bemoaning the desecration and lack of respect some visitors have for the natural beauty of his homeland.

"Until five years ago we had only backpackers, real outdoors people. Now everybody treats it like Disneyland."

A traditional Havasupai wake took place March 1. His body was laid to rest alongside his father Elmer at the Pioneer Cemetery, Grand Canyon.

Arrangements were under the direction of Norvel Owens Mortuary.