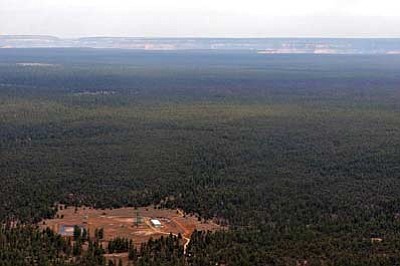 The Havasupai tribe and three conservation groups sue the U.S. Forest Service over its decision to allow mining at the Canyon uranium mine six miles from the south rim of Grand Canyon. Photo/Bruce Gordon, Ecoflight.

The Havasupai tribe and three conservation groups sued the U.S. Forest Service March 7 over its decision to allow Energy Fuels Resources, Inc. to begin operating a uranium mine about six miles from the south rim of the Grand Canyon.

The Havasupai Tribe along with Grand Canyon Trust, Center for Biological Diversity and Sierra Club contend the Forest service did not consult with the tribe or update a 1986 federal environmental review.

In a press release, the groups said the Canyon Mine threatens cultural values, wildlife and endangered species and increases the risk of soil and groundwater pollution near Grand Canyon.

"We regret that the Forest Service is not protecting our sacred site in the Red Butte Traditional Cultural Property from destruction by uranium mining," said Don Watahomigie, chairman of the Havasupai tribe. "The Havasupai are returning to the federal courts to protect our people, our religion and our water."

The mine falls within the 1-million-acre "mineral withdrawal" approved by the Obama administration in January 2012 that prohibits new mining claims and mine development on old claims lacking "valid existing rights" to mine.

In April 2012, the Forest Service decided there were "valid existing rights" for the Canyon mine, and in June it issued a report explaining its decision to allow the mine to open without updating the 27-year-old environmental review.