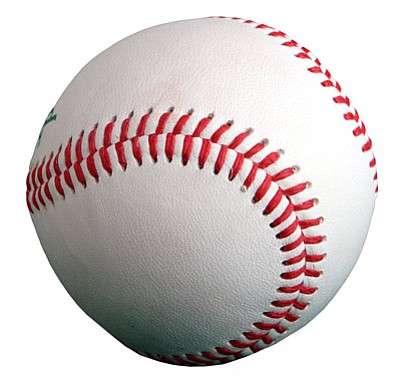 GILA BEND, Ariz. - The Williams High School (WHS) varsity baseball and softball teams both started the 2013 season strong by each going 6-0 on their way to first place finishes at the Gila Bend Tournament on Feb. 28-March 2.

The games do not count toward Arizona power point rankings, but starting the season with a tournament championship gives both teams confidence and experience going forward.

WHS played two games a day and in accordance with tournament rules each game had a time limit of 90 minutes.

The Vikings put in six dominating performances in three days, easily handling every opponent they faced. In fact, the closest margin of victory was a nine-run win against the Gila Bend Gila Monsters on March 1.

The Lady Vikings had some closer ball games, but still managed to hit, run, pitch and field extremely well on their way to the softball tournament championship.

"Some of those games we only played two to three innings because we were hitting so long," said Vikings head baseball coach Phillip Echeverria. "But that's okay because I wanted my kids to have the opportunity to hit."

And hit they did.

The Vikings defeated the Antelope Rams (Wellton, Ariz.) 18-1 on Feb. 28 in three innings of play. The Vikes followed that win with another victory Feb. 28 against the Tonopah Valley Phoenix 13-1 in five innings.

After four innings, the Vikings were victorious against Gila Bend 10-1 on March 1. For the Vikings' second game on March 1, they defeated the Ajo Red Raiders 24-0 in three innings.

On March 2, the final day of the tournament, the Vikings played Antelope again, this time winning 17-0 in three innings. The Vikes then beat Gila Bend 16-6 after five innings of play on March 2 to claim the tournament championship and hoist the first place hardware.

"The competition was a little bit weaker down there than it has been in years past, and our team came out swinging the bat much better than it has in years past," Echeverria said. "I think our pitching is right where it needs to be this time of the year too. We threw everybody we had down there, and I have eight or nine kids that can throw off the mound. That makes it real nice for a school our size to have that availability."

Six different pitchers for the Vikings recorded a win at the tournament. Junior Kohl Nixon actually had a perfect game going against Gila Bend on March 1, until an error in the outfield and a hit by a Gila Bend batter shortly after ended it. Nixon pitched four innings.

"He [Nixon] threw well, he threw harder than we'd seen in the past, he had great rhythm in the game, his tempo was good and he was all around the strike zone," said Echeverria. "It was a good outing for him. And that's the same for [senior] Garret Pettit, Garret also did a good job for us."

Echeverria said he took 14 players down to Gila Bend to play in the tournament and all 14 had opportunities to play. The coaching staff was able to get a good look at everybody in different positions and in different scenarios.

"The main purpose of that tournament is to go down there and learn a little something about each other and try to bond together," Echeverria said. "Our goal simply is to win a ball game whenever we take the field. If everybody's on that same page I think we'll be successful this year a lot more than we end up failing."

The first weekend of play for the Williams Vikings' baseball team showed their depth at pitching and hitting, as well as their adeptness at base running. The Vikings stole a total of 54 bases over the six games at the Gila Bend Tournament.

WHS varsity baseball and softball players gladly accepted their first place trophies on March 2 in Gila Bend. They now look forward to the official start of the regular season and plenty more games to come.

Williams' baseball and softball home openers are March 13 at 2 p.m. against the Northland Preparatory Academy Spartans from Flagstaff, Ariz.