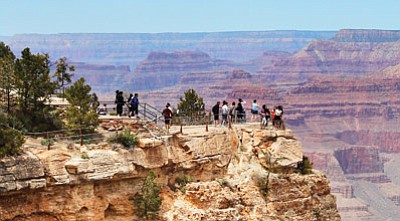 Visitors to grand canyon spent $467,257,000 in Arizona in 2011 according to a study by Yue Cui, Ed Mahone and Teresa Herbowicz of Michigan State University.

"Grand Canyon National Park is one of 22 national parks in Arizona," Grand Canyon National Park Superintendent Dave Uberuaga said. "These national parks are exceptional places - the jewels in America's crown where we relax, get exercise and learn about America's story. And the people who live and work in communities near these national parks are invested in the parks. Whether they visit a park, own or work at a business that serves local or long distance visitors or provides services for a park or park employees, the money visitors spend on national park trips has a positive impact on local economies, the economy of Arizona, and on our national economy."

The NPS report is done on an annual basis and is prepared through a cooperative agreement with Michigan State University. The entire report, with information by park and by state on visitor spending, jobs and other impacts, is available online at: www.nature.nps.gov/socialscience/products.cfm#MGM, under "Economic Benefits to Local Communities from National Park Visitation, 2011."

According to the report, most visitor spending supports jobs in lodging, food and beverage service (63 percent) followed by recreation and entertainment (17 percent), other retail (11 percent), transportation and fuel (7 percent) and wholesale and manufacturing (2 percent).

This week the NPS also released its 2012 visitation numbers showing an increase of 3.8 million over the previous year for a total of 282.8 million visitors to the NPS's 398 parks. Visitation broken down by park and state is available online at www.irma.nps.gov/Stats/.

These numbers will be the basis for next year's economic benefits report.

More about Grand Canyon National Park and how the NPS works with Arizona communities to help preserve local history, conserve the environment and provide outdoor recreation is available by visiting www.nps.gov/arizona.