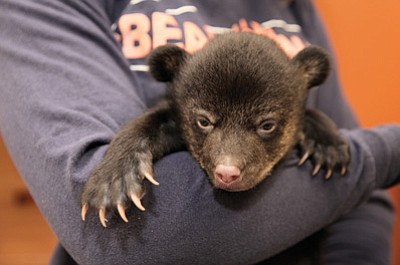 One of the twins relaxes in Hale’s arms. Ryan Williams/WGCN

Twin girls Kalani and Kenai were born the first week of January. A set of triplet boys named Cisco, Charlie and Chip were also born in January.

Lead keeper Amber Hale bottle-feeds the cubs about every six hours. The cubs will be on the bottle until the end of April or the beginning of May. At that point the cubs will move to their own enclosure. Until then, visitors can see the cubs in a special neonatal unit in the gift shop.

"We like to make sure everyone knows there's no touching or handling of the bear cubs, said operations manager Jocelyn Monteverde. "They can see them real close though."

At age one, the bears will move into the "kindergarten bears" enclosure and at age three, they will move to the adult enclosure.

Black Bears commonly have two to four cubs per litter, and can nurse as many as six cubs.  Despite high birthrates, only four out of ten cubs will reach their first year of life. The 60 percent cub mortality rate is a result of starvation and depredation by male bears and other large carnivores.

Arizona has a stable population of black bears in the wild, however the elusive animals are rarely seen. Visitors to Bearizona Wildlife Park are able to get a close encounter with captive black bears, while learning about their habits and history.

"The connections people make between our animal residents and the habitats in which they reside are key to understanding and conserving wildlife," explained COO and Curator Vanessa Stoffel. "We have a unique opportunity to educate the public about what it means to live with and recreate among black bears, and these little ambassador cubs are where it all begins."

Another recent addition at Bearizona is badger Annie Oakley. She has been in the walk-through area of the park since August or September.