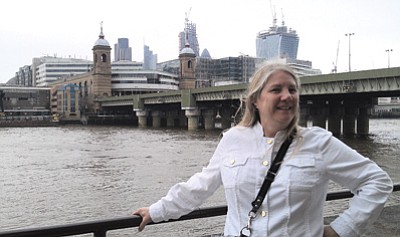 News of the many attractions in Williams traveled abroad last month along with Gioia Goodrum, Williams-Grand Canyon Chamber of Commerce president.

Goodrum was part of an Arizona Office of Tourism (AOT) Media Mission in Dublin and London from May 18-26. Representatives from Flagstaff, Phoenix, Scottsdale and AOT also went on the trip.

The group flew to Dublin first and met with about 18 journalists from a variety of newspapers and magazines. In London, the group met with about 25 more journalists, in hopes that they would write a story about Arizona or want to travel here.

"We found out what it was they were most interested in and then pitched to them what Williams had to offer," Goodrum said.

The Media Mission participants gave each journalist a flash drive with press releases, photographs and contact information. They also used iPads to show the journalists photographs of their towns.

Goodrum said it was important to emphasize northern Arizona's climate and landscape.

"I would say that we have the nicest stretch of Route 66 because you can walk on our Route 66," Goodrum said. "Ours you can actually get that feeling of cruising Route 66."

Goodrum also highlighted Williams as the Gateway to the Grand Canyon.

"We really offer a great sort of hub to people who want to go to the Grand Canyon," Goodrum said, adding that Williams is also a starting point for trips to Sedona and Flagstaff.

The Chamber also used money from the AOT's cooperative marketing program for rural communities for the trip. Goodrum's sister donated her frequent flyer miles to pay for the flight.

Goodrum had never been to London or Dublin before, and had one day to do some sightseeing. She visited the Tower of London, saw the Crown Jewels, went on a Harry Potter tour, rode the tube, and visited the Borough Market. Goodrum said the trip allowed her to experience tourism from a different perspective.

"As a tourism director, it was fun for me to play tourist and say to myself, 'how do I take my experience as a tourist and turn that into how do I make the experience better for people that are coming here?'" Goodrum said.

Goodrum called the trip a "whirlwind experience," but said she enjoyed meeting with the journalists and promoting Williams.

"It really was just a fantastic opportunity for us," she said. "So I'm hoping that we get a lot of mileage out of this."