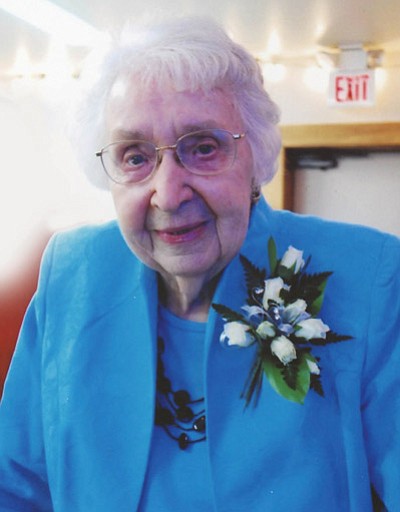 Beulah M. Root, 102, entered peacefully into Heaven on Friday, June 14, 2013. Her daughters Virginia and Mary were at her side.

Beulah was born March 3, 1911 in Omaha, Neb. She was married on June 23, 1934 to George W. Root. They were married for 57 years before his passing in 1991. She was the city bookkeeper, city clerk and city administrator of Bellevue, Neb. before the family moved to West Covina, Calif. in 1964. There she worked for the Basset Unified School System and was awarded the coveted Silver Apple for her wonderful work with children. After her retirement, she and George moved to Arizona in 1977.

She was proceeded in death by her husband George and her great-granddaughter Dionne.

A memorial service will be held on Tuesday June 25, 2013 at 1 p.m. at Flagstaff Christian Fellowship, 123 S. Beaver St., Flagstaff, Ariz. The service will be led by Beulah's grandson Pastor John Craft of Sheridan, Wyo. A fellowship will follow at the church.

Condolences can be sent to www.norvelowensmortuary.com.

Arrangements are by Norvel Owens Mortuary.