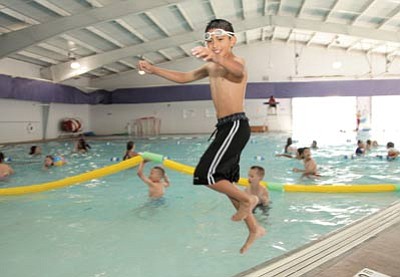 School's out, but kids won't be bored this summer with the Summer Splash Rec Program at the Williams Recreation Center.

The program is for kids ages 6-13, and goes until August 2. The Rec Center offers the program Monday through Friday from 9 a.m. to 3 p.m. The cost is $5 per day plus field trip costs.

The Rec Center has offered this program for more than 20 years.

"We provide a safe environment where we teach citizenship skills to these kids," said Rec Center Director Rose Newbold.

Newbold said the program has a record number of children this year, which she expected with the end of Williams Unified School District's 21st Century summer program. Newbold anticipates having about 120 kids in the program this year. She had more than 80 for a field trip last week.

"Usually we start off a little slower and then hit these numbers by the end of the year," she said.

The group swims on Wednesdays and Fridays. On Tuesdays the group goes on field trips, including going bowling and to the movies and visiting Heritage Zoo and Freedom Station Amusement Park. On June 4, the group took a field trip to Bearizona Wildlife Park, which owner Sean Casey provided for free.

"That is a huge commitment that they do for the community that's just unbelievable," Newbold said.

When the kids aren't swimming and going on field trips, they are doing crafts, enjoying the playground, and playing games, pool, air hockey, and sports such as basketball and kickball. The kids also put on a talent show, have a luau and a water play day. The program balances organized activities and free play.

"The kids really don't know when they come in, other than when they're swimming or going on a field trip, really what to expect," Newbold said.

Camp Civitan Summer Food Service Program provides lunches and snacks for the kids, which is included in the cost.

New to the Summer Splash Rec Program this year is the "Learn to Skate" program. Staff members will teach kids how to skateboard, roller skate or roller blade on flat ground. At the end of the program, the kids will hopefully be able to skate small ramps in the Skate Park.

"So under all the fun is an educational component that we work hard at creating great citizens for the next phase of our community," Newbold said.

The Williams Aquatic Center opened with a free swim day May 25, which more than 100 people attended.

This year, the Friends of the Williams Aquatic Center (FWAC) received a $1,450 grant from the Greater Williams Community Fund. The grant money, along with money from FWAC and the city, will help pay for an additional lifeguard at the pool.

"That was a complaint we were hearing last year, people were like, 'oh I wish the pool was open earlier in the morning or later at night,' so now it is and people need to go swim," said Clare Hydock, FWAC treasurer.

The pool will stay open until August 10.