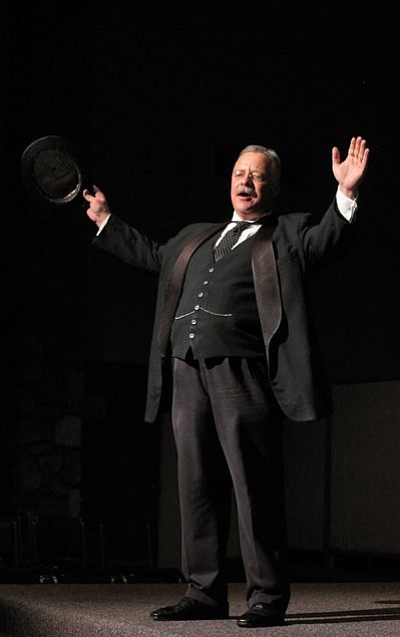 Joe Wiegand regales the crowd with stories of his experiences as Teddy Roosevelt at the Grand Canyon during his last performance in January. Clara Beard/WGCN

During this special program, Joe Wiegand will perform a living history portrayal of the 26th president of the United States at 8:30 p.m. at McKee Amphitheater located on the South Rim behind Park Headquarters near Parking Lot A.

Visitors and residents alike can enjoy Roosevelt's adventures as a rancher, Rough Rider and father of six in the White House, as well as relive the establishment of America's great national parks, forests, monuments and wildlife reserves.

Wiegand's presentation features stories of the frail young boy who overcame the odds and dedicated himself to the Vigorous Life and the Square Deal. From bear hunts to the Panama Canal, from Africa to the Amazon, Roosevelt's delightful stories come to life through Wiegand's vibrant storytelling.

Roosevelt, considered by many to have been our country's "Conservationist President," protected approximately 230 million acres of public land during his presidency.

In 1903, Roosevelt visited Grand Canyon and said, "The Grand Canyon fills me with awe. It is beyond comparison-beyond description; absolutely unparalleled throughout the wide world... Let this great wonder of nature remain as it now is. Do nothing to mar its grandeur, sublimity and loveliness."

The public can attend an additional special evening program focusing on living history on June 24, where a cast of characters including John Wesley Powell, John Hance, the Kolb brothers, Mary Colter, Ranger Eddie McKee and possibly Theodore Roosevelt himself will tell the human story of Grand Canyon during the second annual "Echoes from the Canyon."

More information and maps to the location are available on the park's website at www.nps.gov/grca/planyourvisit.