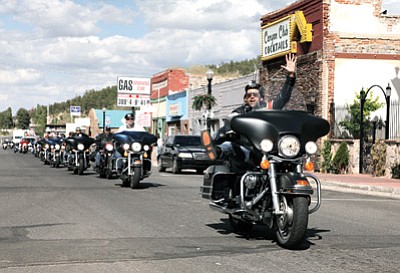 Bikers from Uruguay ride through Williams. A documentary about the bikers and their trip along Route 66 will air in Uruguay. Ryan Williams/WGCN

A documentary about a group of motorcyclists from Uruguay on a dream trip along Route 66 will feature Williams and other towns along the historic roadway.

The bikers passed through Williams with a small film crew May 28. The documentary will initially air in Uruguay when the trip is complete.

About 35 motorcycle enthusiasts from Uruguay decided to make the trip because of their interest in Route 66 and motorcycles. Many have their own bikes back in Uruguay.

"Lots of guys of the group, they thought about this trip for years," said filmmaker Sebastian Beltrame of Uruguay. "It's like a dream for most of the group."

Beltrame is a producer for his own company, En Foco. Along with his wife, Beltrame is making a five-part documentary about the motorcycle trip. Each program will be an hour long and will air on Monte Carlo TV in Uruguay.

"I decided to come here because it's a great experience and to show the history of United States and the whole Route," he said.

The group started in Chicago and rode about 300 miles each day along Route 66 to Los Angeles.

"Each day we continue to the next town, visiting historic places and riding all over the historic Route 66," Beltrame said. "Every time we arrive to a new town we find the people so friendly."

When the group arrived in Williams, they rode around Route 66 with a police escort. Beltrame said the riders were impressed with the reception they received in Williams.

"Now it was great because the first time the people when we arrived are expecting to wave our group and the police went with us around the town and it was great, really great," he said.

The riders arrived in Williams after visiting the Grand Canyon, which Beltrame called "amazing."

Sally Chambers, a senior international trade specialist with the U.S. Commercial Service, has been working with the U.S. Embassy in Montevideo to help advise the group about their trip.

"It's sort of the trip of a lifetime," she said. "I don't think any of them had ever been to the U.S. before."

Chambers said the exposure on Uruguayan television will be beneficial for the places the bikers visited.

"Hopefully it will encourage more people to want to take their vacation either touring Route 66 or just in the Southwest," she said.

Often times people from Uruguay visit places near the coast like Florida, New York, California or Las Vegas, Chambers said. But this trip allowed the group to see diverse scenery.

"I'm thinking they'll just take away how immense, how beautiful, and how welcoming the country has been," she said.

Beltrame said the trip was unforgettable.

"It's a great experience for us to be here and to know your history, and we are returning to our country with lots of remembers and we are going to talk about this trip for a long time to our friends and childs," he said.