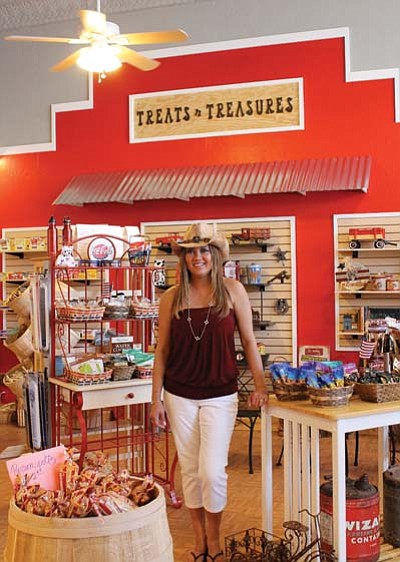 Treats N Treasures manager Linda Miller stands with some of the gifts available in the shop. Marissa Freireich/WGCN

People can satisfy their sweet tooth at Treats N Treasures on Route 66.

"We've been in and out of (Williams) just as visitors, and we've noticed there's really no old-fashioned type candy store, ice cream store, stuff like that," Linda Miller said.

Miller added that her mother had wanted to go into business in Williams and eventually retire here.

"So we talked her into doing something like this that's completely unique and different," she said.

Linda and Glenn opened the store on Mother's Day.

The store's main focus is homemade ice cream. A woman in Phoenix makes the ice cream two tubs at a time using ingredients like vanilla beans from Madagascar and chocolate from France.

"That's why the flavors are just so rich," Miller said, adding that the ice cream has about 16 percent butterfat. "You can go down the street and get ice cream, but when you compare the tastes, there's a big difference."

Treats N Treasures features an ice cream flavor made especially for the store called "Fat Elvis." The ice cream has a peanut butter base with banana and honey swirls, bourbon and bacon.

"It's different. It's not what you think when you listen to it," Glenn Miller said. "I always try to get people to taste it and then say, 'what do you think it is? Tell us what you think is in it.' And then they never can figure it out."

Along with the treats, the store sells gifts such as collectibles, antiques, purses, accessories and shirts.