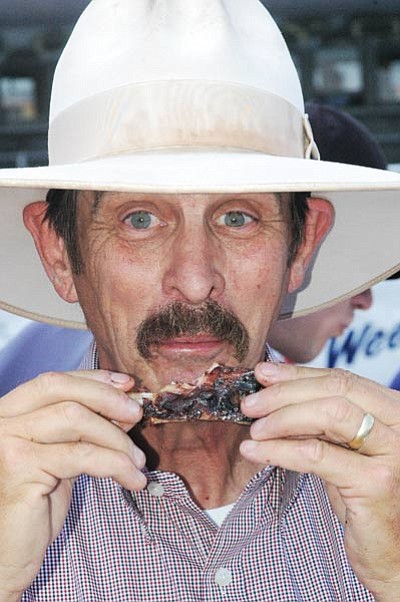 For most people, barbecue is just a food, but for Kansas City Barbeque Society (KCBS) member Arlie Bragg, it's an art.

Bragg is the cook off coordinator for the KCBS-sanctioned Northern Arizona BBQ Festival. The Williams-Grand Canyon Chamber of Commerce will bring the event to Williams for its fourth year June 14 and 15. About 30 teams will compete to win $10,000 in cash prizes for the best barbecue ribs, brisket, pork, chicken and dessert.

Bragg, of Nashville, Tenn., used to compete in cook offs, but now he's coordinated more than 100 of the events.

"The barbecue that we cook as contestants in a barbecue contest is different than you would get in a restaurant, because we put more time into it and layers of seasoning and sauce and things like that," he said.

Bragg said barbecue takes patience, because people must cook it slowly. Some types of meat can take as many as six to 12 hours to cook.

"It's become somewhat of a science these days with cooking temperatures and times and different smokers and things like that."

Some of the barbecue teams that will be competing in the Northern Arizona BBQ Festival will use smokers that cost between $12,000 to $14,000, Bragg said.

The Kansas City Barbeque Society, a nonprofit organization with more than 15,000 members worldwide, has certified most of the judges for the event. The organization puts on classes across the country to teach the judging criteria.

The first judging category for KCBS-sanctioned events is appearance.

"You always eat with your eyes first, if it looks good, it's probably going to be good," Bragg said.

The second category is taste.

The final category is tenderness.

"You've always probably heard the phrase you want fall off the bone ribs. Well that's overcooked," Bragg said. "We teach if you have a rib and you bite the meat, only that portion of the meat should come off the bone. And while you're chewing that, if you watch the bone, the bone will dry up and turn white."

The contest will have the same number of teams and judges. Judges will evaluate six teams each.

"If the judge were to eat all the meat we put in front of them, they would eat 2.6 pounds of meat," Bragg said.

Judges taste each entry, score it, and eat crackers and drink water before the next entry.

The winner of the Northern Arizona BBQ Festival will be invited to compete in the American Royal World Series of Barbecue in Kansas City in October.

The Northern Arizona BBQ Festival will take place from 6 to 11 p.m. on June 14. The barbecuers arrive on this day to start cooking. The event will go from 10 a.m. to 4 p.m. on June 15. Tastes will be available on this day for $2 a piece.

Admission to the event is $5 for one day and $7 for both days, which does not include food.

The Williams-Grand Canyon Chamber of Commerce will serve meals both nights, and a beer garden will be available.

Camp Civitan is organizing a Kid Zone for the event, with profits supporting the organization. The organizers plan to offer face painting and games.

Got barbecue?
BBQ returns to Williams bigger and better than ever
Northern Arizona BBQ is right around the corner
Life, Liberty and the pursuit of great barbecue
Barbeque Festival up in smoke
Event Calendar