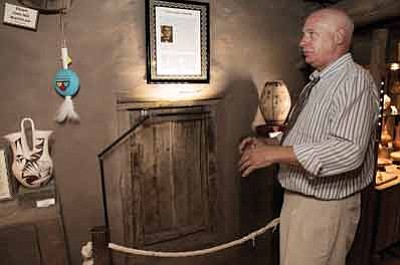 Xanterra’s Henry Karpinski, Hopi House manager and historian of the region, explains the significance behind the Hopi Door. Karpinski was a key force behind the installation of the displays. Ryan Williams/WGCN<br /><br /><!-- 1upcrlf2 -->

GRAND CANYON, Ariz. - Perched on the South Rim of Grand Canyon National Park across a circular driveway that leads to the entrance of famed El Tovar hotel is a striking building that looks much like an ancient Hopi Indian dwelling.

And that's the way it is meant to look.

Xanterra South Rim installed three new interpretive displays in the Hopi House to highlight the building's significant role in educating American travelers about the culture, traditions and artistic contributions of the native residents of the region.

Opened in 1905, the Hopi House is known for its displays and offerings of hand-crafted Native American sculptures, pottery and jewelry.

Xanterra's Henry Karpinski, Hopi House manager and historian of the region, was a key force behind the installation of the displays.

"The Grand Canyon's human history is clearly illustrated in buildings like Hopi House, which has more than a century of historical significance, and these interpretive displays have been designed to add color and depth to the overall Canyon experience," Karpinski said.

Most people don't need a wall-sized timeline to illustrate their career, but Mary Elizabeth Jane Colter unquestionably does. At the top of the stairs leading to the second floor of the Hopi House, Xanterra installed a timeline depicting Colter's work.

At the recommendation of Fred Harvey's daughter Minnie Huckel, the Fred Harvey Company hired Colter at the age of 33, and she continued to work for the company for the next 46 years.

Incredibly detail-focused, Colter liked to develop stories surrounding each of her buildings. She designed and named Hermit's Rest, for example, after she heard the true story of a mountain man who lived at nearby Hermit Canyon and guided tourists around the Grand Canyon in the 1890s. Inspired, Colter developed Hermit's Rest as a rest stop for travelers on a stagecoach tour. Visitors to the stone-walled, rustic Hermit's Rest then - and today - can easily imagine a ragged old hermit climbing out of the canyon at day's end and settling in for the night inside the rugged structure.

A display marking the sealed door to "Nampeyo's Apartment" showcases the important role Native American artists played in the development of tourism in the Southwest, particularly the Grand Canyon.

Beginning in the early 1900s, mainly Hopi artisans lived on the top floor of Hopi House while the first two floors featured workshops and areas for tourists to purchase their items. Navajo artists lived next door in several hogans.

Nampeyo was a female potter of Tewa descent who is credited with single-handedly reviving Hopi pottery as an art form. Although she learned from her mother and grandmother to make traditional Hopi pottery, the products at the time were bland and strictly utilitarian. That changed when Nampeyo's husband, while working on the 1885 excavation of a Pueblo ruin called Sikyatki, uncovered old Hopi pottery that featured a beautiful and intricate style. Nampeyo incorporated the style into her own work.

Nampeyo, and several members of her family, lived in the Hopi House on two occasions: after the building opened on New Year's Day, 1905 through that spring, and again, during the winter of 1907.

Nampeyo's pieces proved to be popular and sold well. Today, Nampeyo's pottery can cost close to $100,000.

Another new interpretive display is located near the Hopi Door. Standing only four feet high, this sealed door leads into the Hopi House's "Altar Room." Although the room is no longer sanctified, at one time regional Native Americans considered it a sacred place.

Missionary and student of Hopi culture Heinrich Richert Voth brought the door from Oraibi and installed it in 1913. As a Hopi expert, Voth collaborated with Colter on the Hopi House, and estimated the door to be 150 years old, which makes the door 250 years old now.

Its method of swinging and the way it is put together and fastened with only rawhide thongs reveals an advancement in the Hopi culture. Prior to learning to fashion doors in this way, rock slabs closed Hopi doorways.

The Hopi House opened in 1905 and is the oldest Colter-designed building still standing.

When the Fred Harvey Company noticed that Native Americans were doing a brisk business selling their arts and crafts at the railroad stops along the route of the Atchison, Topeka and Santa Fe Railway, Fred Harvey's son-in-law, J.F. Huckel, began constructing separate structures called Indian buildings near its hotels to sell native items too.

The Hopi House could be considered an early example of sustainable construction. Hopi craftsman used locally salvaged materials such as Civil War-era Western Union telegraph poles and rails for the building. The three-story Hopi House featured electricity at the outset, an unusual feature in the region at that time.

The Hopi House continues to be a popular attraction where high-quality, authentic Native American art is sold. After a major renovation in 1995, the second floor reopened as a gallery, which features traditional and contemporary Southwest Native American arts and crafts, many of which are of interest to collectors of Native American art.