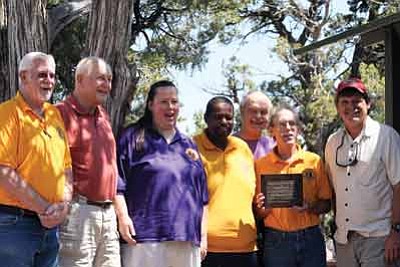 The presentations took place during the society's annual picnic at Shoshone Point on 20 July.

The awards name two recipients who have shown exemplary service to the Grand Canyon community and have made personal contributions of money, time and/or work over a period of many years. Every year, the society honors one deceased and one living recipient.

Previous award recipients and current residents are responsible for recommending this year's recipients. The historical society relies on their recommendations as they know better than anyone who has been involved in community service at the Grand Canyon.

The Grand Canyon Lions Club has lived up to its motto, "We Serve" since its founding in 1961. Lions are best known for fighting blindness, but they also volunteer for many different community projects. In addition to battling blindness and providing glasses for the needy, the club is also heavily involved in helping those with hearing problems and the Grand Canyon School Booster Club.

In a variety of ways they support the Grand Canyon Association Music Festival, local Boy Scouts, Special Olympics and the Komen 3-Day 60-mile Walk for Cancer. The members also stand ready to help those in need through illness, age or disaster. Over the years residents at the Canyon have demonstrated true community spirit and the Lions have more than lived up to the tradition.

Remembered for his efficiency, Tillotson oversaw the construction of park headquarters, village housing and hospital, the relocation of West Rim Drive, and the completion of the Kaibab Trail.

Tillotson was also a member of the Masonic Lodge, and assisted with community projects whenever possible. In fact, his focus as superintendent was to make Grand Canyon a community, perhaps his greatest legacy.

The names of the recipients are engraved on a permanent plaque housed in the Shrine of Ages.