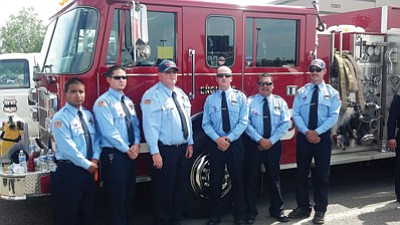 The death of the 19 Granite Mountain Hotshots who died fighting the Yarnell Hill fire June 30 affected fire departments across the country, and the Williams Volunteer Fire Department was no exception.

"It's one big brotherhood, no matter what agency or department you're from around the world, it's a family," he said. "Even though you don't know them personally, it feels like you do, just because you all have the same duty. You joined for the same reasons. I mean, everything that runs through their blood and their veins runs through ours-just wanting to help people, save lives and property."

Pearson added that the tragedy hit close to home because of other people he knows in similar lines of work.

"There are so many people in the community of Williams that are wild land firefighters, and those people are family," he said. "We do have family that have worked for the forest service and do the same types of jobs that they do."

For Pearson, one of the most moving moments of the memorial service was when a bell rang for each of the 19 hotshots who died in the fire.

"I don't know exactly how to describe that feeling when it's silent and they're ringing the bell," Pearson said.

Ortiz added, "The only thing I can think of is bone-chilling."

Firefighters came to the memorial from Vancouver, New York, Florida, Texas, South Dakota and Washington, according to Pettit.

"I just thought it was pretty neat, the support from all around, even from Canada," he said. "I thought that was pretty impressive."

Pettit described the death of the hotshots as a wake up call.

"It kind of makes you more aware of your surroundings on calls," he said.

"It kind of makes you appreciate the guys you work with on our fire department," he said.