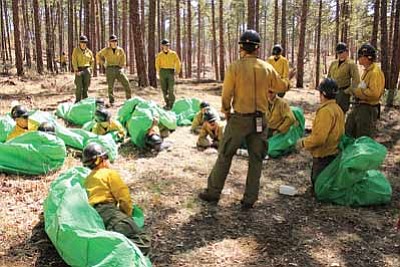 WASHINGTON -Condolences and offers of assistance poured in from Washington, Phoenix and elsewhere as the tragedy of the 19 Prescott-area hotshot firefighters killed in the Yarnell wildfire sank in.

President Barack Obama called the fallen firefighters "heroes" and Gov. Jan Brewer asked for prayers for "these men, their families and all of our first responders."

"This day will be eternally etched in Arizona's memory. It will forever ring as one of our state's darkest, most devastating days," said Brewer, who ordered state flags flown at half-staff.

Their statements were echoed by every member of the state's congressional delegation and amplified by the public, which had already given more than 285,000 "likes" by July 1 to a Facebook page created in memory of the Granite Mountain Hotshots crew.

The wildfire was sparked by lightning June 28 about 30 miles southwest of Prescott and had burned more than 8,300 acres by June 30, according to the city of Prescott. The towns of Yarnell and Peeples Valley were under an evacuation order and State Highway 89 was closed by the blaze July 1.

The Granite Mountain Hotshots were killed Sunday while fighting the fast-moving blaze. The deaths are still under investigation.

Obama called Brewer for an update on the blaze July 1 and sent condolences to the "hundreds of first responders who continue to work around the clock to protect homes and businesses from this deadly blaze," according to a statement from the White House.

The statement said that additional help - including air tankers, engines, helicopters and a type-1 incident management team - has been deployed to the region, and Obama reiterated his commitment to providing necessary federal support.

"I've spoken with President Obama and he has pledged any and all necessary resources to fight the Yarnell fire," Brewer tweeted.

She ordered state flags flown at half-staff and declared a state emergency, making $200,000 in state funds available for the fire and authorizing mobilization of the National Guard.

"We are in process of proceeding and waiting for further instructions," said Lauren Devita, public affairs officer at the Arizona National Guard.

A spokeswoman for the Fire Information Desk at the Southwest Coordination Center said crews would continue working to secure the eastern flank of the fire and to protect homes at risk in the evacuated areas.

"All agencies are in this together," said Mary Zabinski of the coordination center, which oversees efforts by the U.S. Forest Service, the Interior Department, the Bureau of Land Management and other federal and state agencies throughout Arizona and New Mexico.

"Five helicopters assigned to the fire will be dropping water on hot spots in support of the firefighters," she wrote in an The National Association of State Foresters is one of those agencies providing support.

"We are working on mobilizing large air tankers and additional type-1 crews to help with the fire," said Dan Smith, fire director at the association. "Agencies help each other through very cooperative agreements."

Reaction from state officials was swift and uniform.

"My heart weeps for those who lost their lives and were affected by today's Yarnell Hill Fire," said Rep. Paul Gosar, R-Prescott, who planned to attend a memorial service for the victims.

Sen. John McCain, R-Ariz., called the loss of 19 firefighters "a reminder of the grave risks our firefighters take every day on our behalf in Arizona and in communities across this nation," adding in a statement that "their sacrifice will never be forgotten."

Rep. Raul Grijalva, D-Tucson, said in a statement that while firefighters are called first responders, they "are often the only responders.

"They are men and women just like us who choose to dedicate their lives to protecting others," his statement said. "Our gratitude for their efforts and our sorrow at their loss cannot easily be measured in words."

Rep. Ann Kirkpatrick, D-Flagstaff, said that while the 19 victims will ultimately be remembered as heroes, "today they are deeply mourned as family members, dear friends, neighbors and colleagues."

"They went to work every day - to a job that was dangerous and thankless. They will never return, and our Arizona family will never be the same," Kirkpatrick said in a statement. "May their brave souls rest in peace."