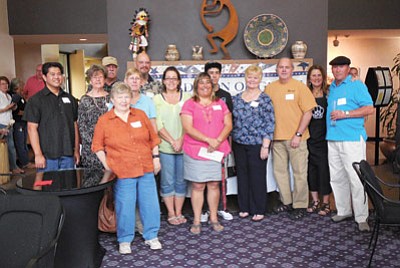 Linda and Chuck Eaton started the GWCF in 2005 in memory of their son Kevin Twitty, who died three years earlier at age 25. The GWCF is an endowed fund that started through an agreement with the Arizona Community Foundation, a nonprofit organization that manages the money.

According to the GWCF's brochure, "Endowments are permanent charitable funds in which the principle is preserved and invested, while a portion of the investment returns are used for grants to community organizations."

In other words, the GWCF doesn't use the principle, but can use about 5 percent of the income earned off of the principle for grants, explained Kristine Vasquez, chair of the GWCF steering committee.

"It keeps on giving," Vasquez said. "If I donate, my money is going to help this town forever."

The goal of the organization is to reach $1 million.

"If you had $1 million in assets in your fund...we could give away every single year from just the interest and the investment money $50,000 a year to our local nonprofits," Vasquez said.

Every donation helps the fund reach its goal. A few years ago, the GWCF started the 1881 club.

"People who couldn't see giving large amounts of money could give $18.81 and still be a part of it," Vasquez said. "So it gave us a broader base."

Another way people can support the fund is through The Gallery in Williams' raffle for art that gallery artists donate. Every six weeks the gallery will sponsor a drawing and then offer a new raffle. Tickets are $2 each or six for $10 and are available at The Gallery in Williams, 145 W. Route 66. The money from the raffle goes to the GWCF.

"We're trying to think of different creative ways to build up that fund," Vasquez said.