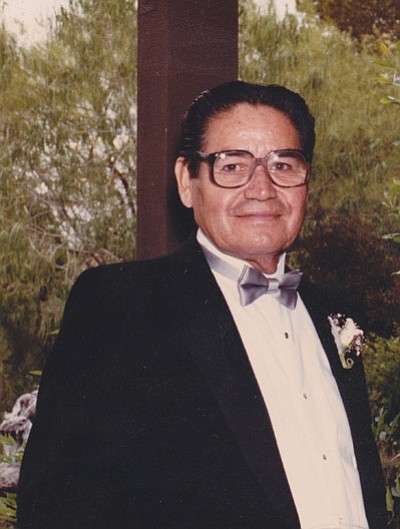 Jesus S. "Jess" "Chuy" Roman, 93, of Phoenix died on June 29, 2013 in Phoenix. Dad, your family misses you so much already, but we are comforted in our love for each other--your lasting legacy.

Dad is preceded in death by our mother and Nana, Josephine Roman, without her since November 1992. He is survived by his son; Jesse (Beth), Barbara (Jim) and Kristina (Reed) grandchildren; Jason, Casey, Jesse, Allison, Garrett and Lindsay, and great-grandchildren; Coen and Carsten, and many nieces, nephews from Flagstaff and Phoenix.

Dad was born on February 11, 1920 in El Paso, Texas to Juan and Ventura (Sanchez) Roman. About 1921, as a child his family moved to Williams, Ariz. His adventures in small town Arizona were always a source of wonderment to his family as well as his successes in his professional life. He graduated from Williams High School in 1939. He enlisted in the U.S. Army in 1941, proudly serving during World War II, one of the courageous young men who landed at Omaha Beach, earning a Bronze Star and Purple Heart for his bravery. After returning to the U.S. he moved with his dad and sister Juana to Flagstaff and shortly after he moved to Phoenix. He loved to attend the Williams reunion every year. Jess always enjoyed visiting family and friends in Williams and Flagstaff and always looked forward to having a drink at the VFW, American Legion, Order of Purple Hearts and the Elks Lodge, where he was a life member of these and several other organizations.

Up until the last day of his life, Dad was thinking of imaginative ways that would allow him to remain as independent as possible in the home where he raised his family. There he stayed until three days before he passed away.

The family greatly appreciated the help and support of his neighbors, especially Manuel and Maria, Dr. Terry Clark, VFW Post #720 and the staff of Coronado Home of Hospice of the Valley.

Holy Rosary will take place on Wednesday, July 3, 2013 at 10 a.m. with funeral mass to follow at 11 a.m. at Our Lady of Guadalupe Chapel, 224 S. Kendrick. A Veterans honors ceremony will be conducted after mass by members of Flagstaff's Veterans Organizations. Burial will be held on Friday, July 5, 2013 at 10 a.m. at St. Francis Catholic Cemetery Mausoleum, 2033 N. 48th Street, in Phoenix, Ariz.

Condolences may be sent directly to the family or expressed online at www.FlagstaffMortuary.com.

Arrangements are by Lozano's Flagstaff Mortuary.