Gunfights and train robberies: all in a day's work for Williams' own Cataract Creek Gang performers 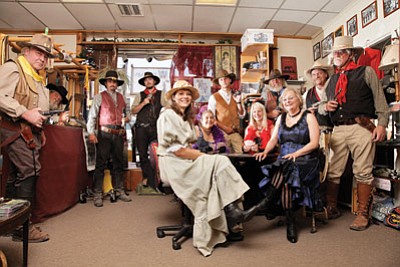 With train robberies by day and gunfights by night, the Cataract Creek Gang brings the old west to life in Williams.

About 15 people make up the Cataract Creek Gang. Members perform 20-minute energetic, humorous and interactive gunfights at different locations along Route 66 each night at 7 p.m.

The performers take their roles seriously, and stay in character before and after the show. They also dress the part, wearing 1850-1880s style clothing.

"People see you in a completely different way than when you're in your regular clothes," said gunfighter David "Turtle" Nardini.

"But because we're dressed like this, we can laugh and joke and say things to people. And we have fun," he said.

The history of the Cataract Creek Gang goes back more than two decades.

The first train robbery took place in 1989. At that time, Max and Thelma Biegert reopened the railway after passenger service to the Grand Canyon had stopped in 1968. Then-governor Rose Mofford rode the train for its first run. Her staff wanted her to get "robbed" on the train in a safe manner, explained Buck Williams. Mayor John Moore, who at the time was the police chief, had some of the police officers stage the train robbery.

"Well, it went over so big, Max Biegert decided we'd have a train robbery every day," Buck Williams said. "That got it started, and then the Chamber of Commerce said, 'Well what if we do cowboy shows in town to attract tourists?'"

The gunfights started in about 1994. Nowadays, people come from all over the world to see the performances. The Cataract Creek Gang even has a fan club in Germany.

"They each take on a persona of one of the guys," explained Cataract Creek member Patty "Miss Violet" Williams. "And then they're not an official member of the gang until they come out here and get robbed."

Buck Williams said many people enjoy the gunfights so much that they come back to see them again.

"We had one of the cowboys over here a while back, he's standing there, a 17-year-old girl comes up and starts hugging him," Buck Williams said. "She had her picture taken with him 11 years ago. That's been her cowboy for 11 years."

But tourists aren't the only ones who enjoy the show. Some locals, especially children, come to see the show on a regular basis.

"They know the dialogue. And they'll come up and say, 'You did really good this year,'" said Patty Williams, adding that some of the kids know if the performers miss a line.

The Cataract Creek Gang members usually start practicing about six weeks before the show starts, rehearsing at least once a week. They alternate between two shows every other night.

Besides learning their lines, Cataract Creek Gang members are also responsible for taking care of the three horses they use in the shows and maintaining their firearms.

Firearm safety is very important to the gunfighters. All members of the Cataract Creek Gang must pass a background check, be able to legally own a gun and go through a safety course.

And before every show, the cowboys ask another member of the Cataract Creek Gang to check their guns to make sure there are no real bullets.

The Cataract Creek members may have a reputation for starting trouble on Route 66 and on the train, but in reality they do plenty of good deeds.

"We are an asset to the community," said member Richard "Wolf" Smith. "We are very civic minded."

Cataract Creek Gang members all agreed that they joined because performing in the shows is fun.

"You get to interact with different cultures," said member Lisa "Miss Molly" Oakley, adding that the shows include audience participation.

"And that's why they love Williams, because they feel a personal touch," said Oakley. "They were involved in our community."