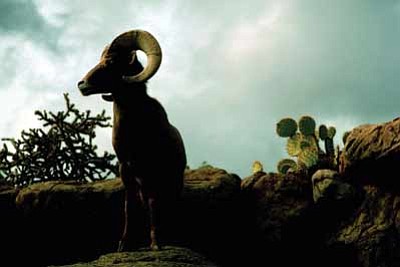 PHOENIX - A southwestern Arizona herd of desert bighorn sheep once used to replenish populations across the Southwest remained depleted for the 12th year in a row, according to a survey by federal and state wildlife officials.

The survey, conducted in October, estimated the number of bighorns within the Kofa National Wildlife Refuge at 428. The herd was estimated at 812 in 2000.

"We don't really know why the population is so low," said John Herbert, wildlife program manager for the Arizona Game and Fish Department. "We weren't studying the animals that closely when the population actually dropped."

October's estimate was up slightly from the last estimate of 402 in 2010. However, officials said the apparent increase wasn't statistically significant.

"It's left us cautiously optimistic," said Susanna Henry, refuge manager the Kofa National Wildlife Refuge. "Things are not worse, but they're not excitingly better."

Henry said the decline could be caused by disease, predators or drought.

"We might not ever know why the population went down, but we can do everything we can to make it go back up," she said.

Game and Fish and the U.S. Fish and Wildlife Service are now monitoring the herd more intensively and have stepped up their management program to ensure the sheep have adequate water and veterinary treatment.

They are also tracking some of the sheep and mountain lions with radio collars to monitor predation.

"Trying to maximize the numbers of the herd, perhaps to the detriment of their habitat, is not what we should be looking at," Bahr said. "They talk about wanting more bighorn sheep when they really should be concerned about protecting their habitat."

Restoring the herd's population to the 2000 level may not be a practical goal for the land they occupy, she said.

"These animals shouldn't be viewed as a crop," Bahr said. "They're not agriculture; they're wildlife."

The Kofa herd has been a main source for replenishing populations in Texas, New Mexico and Colorado since the mid-1950s. Translocations were halted in 2006 when the herd dropped to an estimate of 391.

"You have to have a great deal of patience to see your efforts bear fruit," Herbert said. "They simply do not produce very quickly under favorable conditions. They're limited by their own biology."