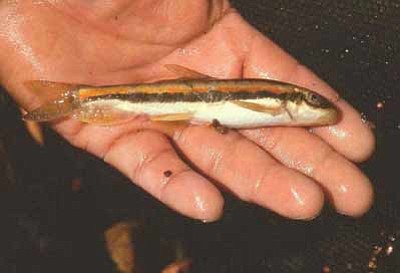 The U.S. Fish and Wildlife Service wants to list the Zuni bluehead sucker as an endangered species, saying it can now only be found in 10 percent of its historic range in Arizona and New Mexico. Photo/New Mexico Department of Fish and Game

WASHINGTON - The U.S. Fish and Wildlife Service on Friday proposed listing a small freshwater fish as an endangered species and setting aside almost 300 miles of Arizona and New Mexico streams as critical habitat for the fish.

No one is sure how many Zuni bluehead suckers are left, but biologists say the fish is no longer found in 90 percent of its historic range.

"This fish is in really big trouble," said Tierra Curry, a biologist for the Center for Biological Diversity, which spent years pushing for the fish's protection.

The 8-inch-long, algae-eating fish is native to the waters of the Canyon de Chelly, the Little Colorado and Zuni rivers, according to the government. But its numbers were severely diminished decades ago by poisons that were used to kill native fish and introduce trout for sport fishing.

Logging and erosion also damaged habitat for the sucker, said Melissa Mata, a U.S. Fish and Wildlife biologist. She said sediment from erosion filled streambeds, covering the pebbles and stones that are home to the algae the fish feeds on and smothering its eggs.

In addition to ongoing concerns about sedimentation, Mata said drought, wildfires and overgrown vegetation now threaten the remaining isolated populations of the fish.

In a companion proposal to the endangered species listing, the government also identified 293 miles of streams in northeastern Arizona and northwestern New Mexico as critical habitat for the fish.

The critical habitat designation requires an additional level of review - by the Fish and Wildlife Service - for any activity that would require a federal permit, from building a bridge or a road to proposals for major development projects.

Active restoration of the fish's habitat will depend on available funding, Mata said.

Curry believes the endangered species designation will help the fish's population stabilize and grow, noting that 14 other endangered fish - including the Gila Trout, native to Arizona - have made significant comebacks since being listed as endangered.

The fish spent decades as a candidate for endangered species status. But in 2004, it and 757 other species were included in a lawsuit by conservationists aimed at getting the Fish and Wildlife Service to act. In a 2011 settlement of that case, the agency agreed to consider all the species in the suit and determine by 2018 whether they should be listed as endangered species.

Sometimes the effects of an animal extinction aren't noticed for 10 to 15 years but eventually they surface, said Wally Murphy, a field office supervisor in New Mexico for Fish and Wildlife.

When a species becomes extinct "it generally has cascading effects that, in some cases, are irreparable," he said.

The notices on the Zuni bluehead sucker was published Friday in the Federal Register, starting a 60-day public comment period on the proposal. Currently, Fish and Wildlife staff said they do not know of any opposition.