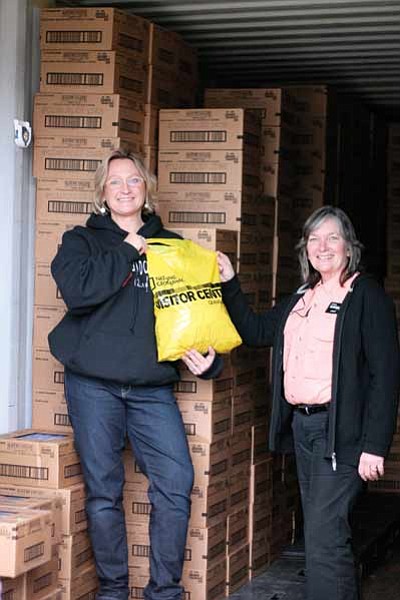 "In August she came in with four big bags and I thought, this is amazing," Rommel said.

Every six months, General Mills' Box Tops For Education program sends a check to GCS after they submit their labels. The last check, sent in December, came out to $1,097, much larger thanks to Imax's contribution.

With the money generated from the labels, Rommel buys books and instructional materials for teachers' classrooms and the library.

National Geographic Visitor Center and Imax Theater General Manager Janet Rosener said the theater has an agreement with Nature Valley to give away a granola bar with a movie ticket purchase. Imax receives shipments from the granola bar company once every five months.

"Up until two shipments ago, they always sent them in generic boxes so we never had the box tops to give away," Rosener said. "Now they send them in commercial packaging which is incredible because now the school will be getting a lot more Box Tops."

"We hope to be able to continue this," Rosener said. "We are about to renew our agreement with Nature Valley in a couple months and we are all so grateful to them for continuing to send in the commercial packing."

Rommel said the addition of Imax's Box Tops has been a boost to their label count.

Contributions may be made to GCS's Box Tops For Education program by contacting the school at (928) 638-2461.