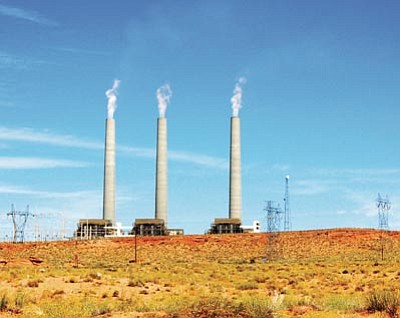 The EPA is proposing significant reductions in emissions from Navajo Generating Station near Page. Photo by R.J. Hall via Wikipedia Commons

PHOENIX - An Environmental Protection Agency (EPA) proposal to reduce air pollution from the Navajo Generating Station (NGS) would give plant owners including Salt River Project (SRP) until 2023 to install the necessary equipment.

That's five more years than Congress called for when it required action to improve visibility at the Grand Canyon and 10 other national parks and wilderness areas in the Southwest.

The proposal announced Thursday seeks an 84 percent reduction in harmful nitrogen oxide emissions via a technology known as selective catalytic reduction. According to the EPA, that would reduce haze by 73 percent, improving visibility and public health.

The 2,250-megawatt coal-fired plant near Page is one of the largest sources of nitrogen oxide emissions in the country, according to the EPA. It provides almost all of the power used to carry water through the Central Arizona Project (CAP) aqueduct.

Navajo and Hopi leaders have said they fear that new emission standards could prompt owners to close the plant, costing hundreds of jobs. That decision is up to SRP, the operator, and five other owners.

An SRP news release said that equipment required to comply with the EPA's proposal would cost as much as $1.1 billion.

Grant Smedley, SRP's manager of environmental policy and innovation, said it appears the EPA tried to take into account previous efforts to reduce emissions from the plant.

Owners voluntarily installed low-nitrogen oxide burners between 2009 and 2011, at a cost of nearly $45 million, that have reduced emissions by more than 40 percent, according to SRP.

"However, we remain concerned that the timing of the proposal may not give us enough time to resolve some of the uncertainties facing the plant before we make a financial commitment," Smedley said. "We also have some initial concerns that it is one of the most stringent limits in the nation and could reduce our flexibility."

together multiple perspectives and is the first step toward a viable agreement. The EPA will make its final decision after a 90-day public comment period.

"We're definitely getting to a place where we can now understand what the suite of options are," he said. "And if there are new ones, we can measure those against the ones we've proposed."

"We are encouraged that the EPA has recognized significant cost impacts to CAP and our customers and tribes that we provide water to, as well as the economic impacts on the Navajo and Hopi tribes," Modeer said.

Kevin Dahl, Arizona program manager for the National Parks Conservation Association, said his organization is mostly pleased with the proposal's emissions limit but not with the additional time suggested for the retrofit.

"Why does the federal government give itself an extra five years when the technology is available and we can do it now?" he said.

Dahl's group was a plaintiff in a lawsuit filed last year accusing the EPA of not moving fast enough to reduce emissions from the Navajo Generating Station and another coal-fired plant in northwestern New Mexico.

"It's good news for everyone who breathes and wants to look at the Grand Canyon without the veil of haze," Smith said. "Our concern is that it will take extra years, up to 2023, to achieve this result."

Sen. Jeff Flake, R-Ariz., released a statement saying Arizonans shouldn't have to pay to address visibility problems that he said the government hasn't tied with certainty to the plant.

"In addition, EPA's proposal is sure to raise water and power rates for tribal and non-tribal communities throughout Arizona, undermining three decades worth of bipartisan water policy and numerous water-settlement agreements," he said.