Teddy Roosevelt comes to life for Grand Canyon audience
Joe Wiegand regales the crowd with historical stories and humor on a presidential scale Jan. 10 at the Shrine of the Ages on the South Rim 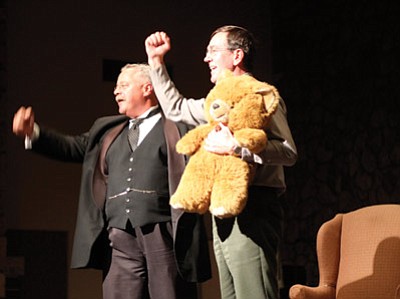 Above: After presenting the Park Superintendent Dave Uberuaga with a “teddy” bear, Wiegand leads the crowd in three cheers for the Grand Canyon. Below: Joe Wiegand takes the stage as Theodore Roosevelt Jan. 10 at the Shrine of the Ages. Clara Beard/WGCN

GRAND CANYON, Ariz. - You can bet you're in for a "bully" evening when Teddy Roosevelt is your guest.

On Jan. 10, Grand Canyon residents stepped into the Shrine of the Ages, and then stepped back in time, courtesy of Theodore Roosevelt impersonator Joe Wiegand.

From unforgettable bear hunts to White House antics, Wiegand treated the audience to an hour of fascinating narratives, peppered with a healthy dose of well-timed Rooseveltian wit.

"This was my first time performing at the Grand Canyon," said Wiegand, who grew up in suburban Chicago. "Like TR (Teddy Roosevelt) seeing it in 1903, it took my breath away."

Wiegand performs in a different city and state almost every night, but still finds time to tailor the show to mirror his location and Roosevelt's connection with it.

"For example when I performed for the Prescott Rotary Club I spoke at great length about the many Rough Riders who came from there," Wiegand said. "The breadth of Teddy's life and the breadth of his legacy lends themselves to a great deal of variety in regard to the content of the program."

However, Wiegand hasn't always toured the country donning a bowler hat and cufflinks.

A lifelong student of American history, government and foreign policy, TIME Magazine named Wiegand one of America's 100 Outstanding College Students. Wiegand has served as an elected county commissioner, a campaign and public policy professional, and as board member of various not-for-profits. He is also a member of the National Association for Interpretation.

After making the decision to perform as Roosevelt full-time, Wiegand honed his new identity at Republican fundraisers or "Lincoln Dinners." From there, he took his act nationally.

"People who came to the dinners would write a big check for a bad piece of chicken and then hear a speech by a politican that made the chicken look good by comparison," Wiegand said.

The year 2008 marked Theodore Roosevelt's 150th birthday and centennial of the final year of TR's historic presidency. Wiegand has performed at the White House and Roosevelt's New York City birthplace for the Sesquicentennial celebration of Roosevelt's presidency.