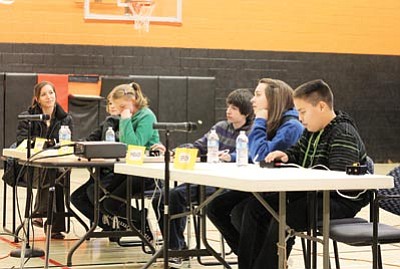 Rheanon Koss (second from right) thinks hard on her way to a first place finish in the social studies category of the Williams Middle School Knowledge Bowl Jan. 15. David Yankus/WGCN

WILLIAMS, Ariz. - Just when you thought bowl season was over, the Williams Elementary-Middle School (WEMS) played host to its fourth annual Knowledge Bowl on Jan. 15 in the WEMS gymnasium.

But this bowl doesn't decide who is the best football team on the field of glory, but instead who has the sharpest and most knowledgeable mind in the field of academics.

Questions in the Knowledge Bowl are in two categories, math and social studies. Each category has a first, second and third prize.

"We honor these kids with prizes and money; first place gets $50, second place $30, and third place $20," said Lechtenberger. "First place always gets a trophy and a gold medallion, second gets a silver medallion and third gets a bronze medallion."

Lechtenberger said the Knowledge Bowl is part of WEMS' ongoing effort to raise the bar academically and to challenge the top students in the eighth grade each year. Students compete in a game show-like atmosphere and answer questions in the two subject areas.

New this year, Lechtenberger introduced previous winners to students and the crowd. He said he hopes to continue this every year as a new tradition. Usually eight students compete, but this year's eighth grade class is smaller than usual so six students competed in each category.

"The first people that are invited to participate have to be on the honor roll," Lechtenberger said. "The others have to apply either by writing a statement asking to be on the panel or just submit a verbal statement explaining their interest in competing."

Lechtenberger said last year he had so many students eligible to compete that they had to not only apply, but also take a test to compete in the Bowl.

"The Century 21 program helped with the food, Guy Mikkelsen donated quite a bit of food, and we had several great volunteers that helped out," Lechtenberger said. "My appreciation and thanks goes out to everybody that helped out and contributed."

According to Lechtenberger, WEMS is committed to stimulating academic interest for the most talented students in the school. This event is one of the many ways that the school rewards those children who put forth the extra effort to succeed beyond the regular curriculum.