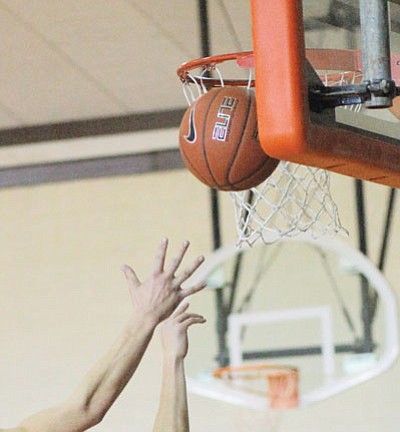 The Grand Canyon Phantoms won two out of their three basketball games last week, bringing their regular season record up to 10-2 in games that count in the Arizona power points system.

David Beery, Grand Canyon head basketball coach, said his team knew Scottsdale Prep was going to be a measuring stick for them. And even though the Phantoms started the game much slower than they had hoped, they managed to fight back every time the Spartans tried to pull away. Scottsdale Prep started the game on a 12-0 run, uncharacteristic for the usually quick-starting Grand Canyon team.

The second half saw a much closer game, with multiple lead changes throughout. Scottsdale Prep had a five-point lead with a few minutes left in the fourth quarter until the Phantoms made a furious rally to take a three-point lead. The lead would not be held for long though, as a Scottsdale Prep player was fouled shooting a three-pointer. He made all three free throws to eventually send the game into overtime.

"A lot of this win was because of determination, we showed a lot of character, we got down and battled back early," said Beery. "We got down again in the third quarter, but we were able to come back again. Then fourth quarter we had to come back to send it into overtime, we showed some grit."

Grand Canyon junior point guard Justin Jarrell started the overtime session with two straight three-pointers, but then received a technical foul, which also counts as a personal foul. This was Jarrell's fifth foul, resulting in him fouling out of the game.

Fortunately, that didn't stop the Phantoms from pouring on the points in the extra session though. They scored 22 points in overtime.

Against Tuba City, Beery said his team really had a tough time stopping the Warriors. It was only a one-point game after one quarter of play, but Tuba City continued to build a lead throughout the rest of the game.

Despite a monster scoring game from Bankston, 38 points on 16-for-22 shooting, the Phantoms were never able to complete a successful comeback.

Combine that with the rest of the team, besides Bankston, shooting less than 30 percent from the field, and it would be hard for any team to come out victorious.

"We've shot threes pretty well on the season, but we were only 3-for-18 that game," Beery said. "And Tuba City has a really deep team, they don't lose much when they go to the bench."

Berry and Jarrell were the only other two Phantoms in double-figure scoring against Tuba City, finishing with 14 and 10 points respectively.

After Tuba City, Grand Canyon bounced back with a blowout win the next day against the Seligman Antelopes.

"Seligman was more of a grind it out game," said Beery. "We knew we had to have the game, but we continually played well the entire game, really consistent, I was happy with our effort. Sometimes when you get up 15 or 18 points the kids kind of relax, but our kids remained focused and played real hard the entire game."

Almost every Phantom got in the scorebook against Seligman, showing a much more balanced attack than their previous game.

Next up for the Phantoms is a trip to Williams to take on the Vikings (5-5) this Friday at 7 p.m. Saturday, they return home to host the El Capitan Eagles at 5 p.m.

The Lady Phantoms now head to Williams to take on the Lady Vikings this Friday at 5:30 p.m. On Saturday, Grand Canyon plays host to El Capitan at 3:30 p.m.