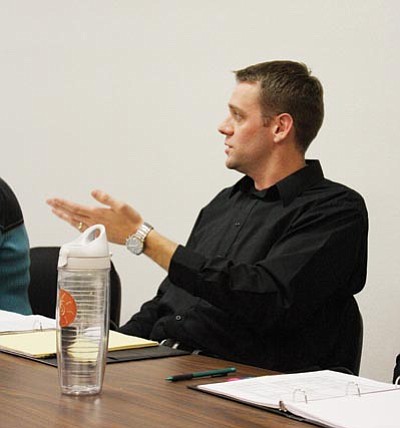 WILLIAMS, Ariz. - The Williams City Council chose three members to serve on the search committee for a new golf course manager at its Jan. 10 meeting.

Councilmen Frank McNelly, Lee Payne and Bernie Hiemenz will serve on the committee, along with City Manager Brandon Buchanan, Human Resources Director Susan Kerley and members of the golf committee.

The council also proposed that golf course Superintendent Marty Yearian have some input in the selection process but not as a voting member.

"When we did the last one we had a meet and greet that was open to the public before we actually did the interviews," Councilman Don Dent said, adding that the candidates brought their wives. "They need to see the town. They need to know what they're in for."

Mayor John Moore instructed city staff to do the necessary advertising to move forward with finding a new golf course manager. The council voted to terminate the management contract with Brent Redman at its Dec. 13 meeting because council members felt Redman failed to maximize revenue.

The council also discussed the city's participation in the North Central Arizona Water Supply Feasibility Study, which could potentially result in a pipeline from Lake Powell to Williams.

At the Dec. 13 council meeting, representatives with the study informed council members that the cost-sharing amount to stay in the project at this point is $1,236.

"We got to talking and looking into it a little bit more and this $1,200 we're going to spend is I think going to very quickly turn into hundreds of thousands," Moore said.

Buchanan added that the city's current agreement regarding wells states that if the city finds another reliable water supply, it would have to shut down the wells.

"I don't like being dependent on just this outside source that could be tied up in litigation or shut down indefinitely or whatever scenario happens," Buchanan said.

He added that the city has relied heavily on wells in recent years because the lakes have been unreliable.

Buchanan asked some of the council members to attend meetings with representatives from the study.

"I'd like to get some more information before we commit 100 percent one way or the other on it," he said. "And $1,200 in the grander scheme of things isn't a lot of money but I don't want to just throw it down the drain if we're not going to continue after that."

Representatives with the study estimate the cost for the study portion is about $400,000.

"That's not design or construction if it goes forward," Buchanan said. "I think you've got a lot of what-ifs that have to be answered and at least thought out before we start throwing that kind of money at it."

Payne said the money would be better spent elsewhere.

"If we're even thinking about spending $400,000, I would much rather put a pump house up here to help fill this tank on Second Street or redo our tanks or things in our own infrastructure to fix our own water instead of chasing a ghost," he said.

Dent agreed that the project would require a lot of money and no guarantees.

"We know wells are expensive but we also know that we can be fairly successful with wells," Dent said.

Moore said he was interested in finding out what other communities are involved in the study and how much money they have committed.

Since the council does not have to commit the $1,236 immediately, it will continue to consider its participation in the study.

Moore also addressed the proposal to move the Economic Development Committee from under the jurisdiction of the Williams-Grand Canyon Chamber of Commerce to the city of Williams, which the council discussed at the Dec. 13 meeting.

Moore said he originally thought the committee would be better off under the city.

"But as I look into it, if we put it in as a committee under the city, they have to follow all the same guidelines we have to follow as far as meetings and stuff," he said. "That might hamper them in negotiating or working with somebody who would like to come to this community."

Moore said he will discuss the matter further with members of the Chamber, but at this point he recommends the committee stay under the Chamber.