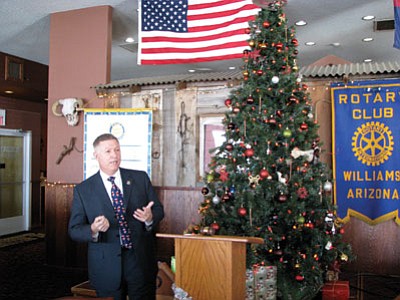 WILLIAMS, Ariz. - People released from Coconino County Jail are less likely to return these days, thanks to several sheriff's department programs for inmates.

Coconino County Sheriff Bill Pribil spoke about these programs and the operations of the sheriff's department in a speech to the Williams Rotary Club Dec. 20.

Nationally, people released from jail have a 50 to 70 percent chance of returning to jail. With the help of county programs for inmates, the rate of people returning to Coconino County Jail after being released has decreased to 35 to 45 percent, Pribil said.

Coconino County offers a life skills course to inmates, which teaches them to make better life choices upon release.

The county also offers a limited treatment plan for those with alcohol or drug addiction. Pribil explained that the majority of those booked into jail are awaiting trial, and many of them have had drug and alcohol addictions.

Pribil said he hopes to offer more programs to help prisoners address these problems. All of the current programs are voluntary.

He added that he would like to provide more programs for inmates after they are released to keep them on track.

Officers booked 10,000 people in Coconino County Jail in 2012. Native Americans make up 50 percent of the county jail population, according to Pribil.

The problem of unemployment on the reservation often leads to crime and alcohol and drug problems for Native Americans. More education and job opportunities would help reverse this high incarceration rate, Pribil said.

"The jail district has paid off its bonded indebtedness and is debt free," Pribil said. He explained the jail district now has a $10 million surplus that can be used for future programs or expansion.

Cleaning crews in Williams each Thursday
Sheriff Richards bids farewell to the residents he has served<br>
Pribil announces candidacy for Coconino County Sheriff<br>
WAADA receives $76,000
Are there opioid problems in Williams?