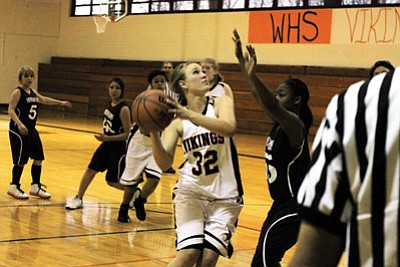 The Lady Vikings played four games in two days during the Camp Verde Tournament. On Dec. 28, Williams lost 57-35 to the Northwest Christian Crusaders (8-5) from Phoenix and lost 46-18 to the Sunrise Mountain Mustangs (6-8) from Peoria. On Dec. 29, Williams defeated the Ash Fork Spartans (0-10) by a score of 25-15, then followed up their first tournament win with a 29-14 loss to the Chino Valley Cougars (4-8).

"We have a tough time putting the ball in the basket," said Phillip Echeverria, WHS girls' head basketball coach. "We take quite a few shots and as a team we're shooting somewhere around 12 to 15 percent from the field. And so that's our major problem right now, scoring."

Echeverria said he did see improvements from some of the girls though when they would get more aggressive inside and take better shots. The baskets just were not falling though.

Sunrise Mountain is a larger school than Williams, but the head coach still felt his squad should have been able to compete with them.

"Again I felt we took some steps towards improving offensively, but we always have one or two quarters where we really struggle putting the ball in the basket, where we'll score two points or zero points in the whole quarter," Echeverria said. "Our goal is to get 10 points a quarter, but if we get at least eight we should have an opportunity to win the ball game."

Against Ash Fork the Lady Vikes started the game on pace to do just that, and although they didn't end up finishing that way they still came away with the win. After defeating Ash Fork, Williams lined up to battle Chino Valley in their final game of the tournament.

"Against Chino Valley, that was probably the worst game of the four we played," said Echeverria. "We took some steps backward in that game."

The head coach would go on to praise the play of his 5-10 junior forward though.

"I thought April Zicopoulos played an outstanding tournament for us down there in Camp Verde," Echeverria said. "After the first half of the Northwest Christian game we challenged her to become a little more aggressive. I tell you what, she played real aggressive the last three and a half games and showed a lot of promise inside. I challenged her and she really picked it up and did a great job."

For the second half of the season Echeverria said his team would be looking to improve offensively and attack the basket more frequently. He admits it's been a struggle scoring this year.

But a big win over an overmatched Mingus Mountain Academy team is just what the Lady Vikes needed, and just how they wanted to start the new year. They learned how to score consistently, be aggressive, and work as a team both offensively and defensively.

Although, one game in particular Echeverria said he still thinks about is the Dec. 11 game at the Grand Canyon Lady Phantoms. Grand Canyon outscored Williams by 16 points in the first half, followed by a second half which saw Williams outscore Grand Canyon by eight.

But the Lady Vikes only scored six points total in the first half against Grand Canyon, which proved too large of a deficit to overcome.

"I was real proud of the girls in the second half though, they stepped up and we did a much better job of being aggressive and taking the ball to the basket and scoring," Echeverria said. "And we picked it up defensively."

The Williams Lady Vikings only have two seniors on the team, and only one starts, so Echeverria stresses the importance of developing the younger players and seeing real signs of improvement. He said his girls take some poor shots, but they also take good shots that just don't fall for them, so there is some light at the end of the tunnel.

"The games that bother me is where we're just not very aggressive and not looking for our shot, and I have some players playing like that right now," said Echeverria. "They're a little nervous out there because they don't want to make mistakes, but they need to take the shot when it's there for them."

Echeverria estimates the Lady Vikings take anywhere from 10 to 20 more shots per game than their opponent. It's clear the Lady Vikes are getting shots; they've just been unable to knock them down consistently so far this season.

Echeverria also added how proud he is of the two freshmen he moved up to varsity, Tyria Harvey and Gabi Giunta. He said they've shown real aggressiveness on the offensive end and they're not scared to put up a shot or take the ball to the basket.

The Williams-Grand Canyon News went to print before the Lady Vikings went on the road Monday to play the Ash Fork Spartans and played host Tuesday to Mingus Mountain Academy.

The Lady Vikes' next two games are Thursday at home against River Valley (Mohave Valley) and Friday on the road against the Seligman Antelopes. Both games tip-off at 5:30 p.m.