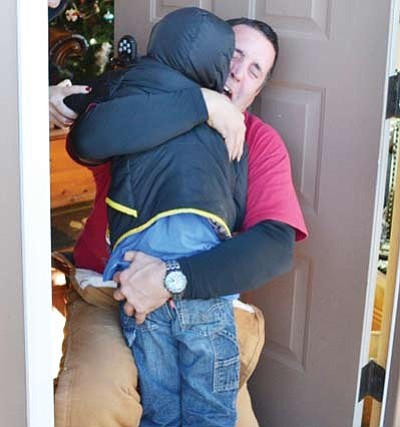 Evans is reunited with his father. Submitted photo

SELIGMAN, Ariz. - While helicopters searched from the sky and hundreds of trained searchers looked for a missing boy outside Seligman, two Seligman residents who volunteered their time found 7-year-old Cole Evans under a trailer about 1.6 miles southeast of his grandmother's home at 11:45 a.m. Sunday.

Cole's grandmother last saw the boy at 10 a.m. Saturday on her property near My Way Road and Lazy Days Road outside Seligman.

"We've had volunteers come up to help us search in the past," said Dwight D'Evelyn, Yavapai County Sheriff's Office (YCSO) spokesman. "Sheriff Scott Mascher's focus is that community members who know the area so well and are screened should be involved."

While driving and checking for potential hiding places on Sunday, the two Seligman residents saw a young boy underneath a trailer.

They stopped to investigate, and the boy came running toward them. They both recognized Cole immediately, D'Evelyn said.

After Cole was brought to the search command post, he was reunited with his family at their home.

"He was elated to see his mom and dad," D'Evelyn said. "He didn't seem to be overwhelmed by the situation he was in. The autism may have played a role in him not panicking with the noise from the helicopter."

Cole's parents, Kyle and Chany Evans, thanked everyone who searched for and helped find their son. DPS ranger paramedics examined Cole for the effects of exposure and concluded he was in good condition with no further medical treatment necessary.

Now, detectives are hoping to sort out Cole's path of travel during the 24 hours he was missing and to determine exactly how he survived the 15-degree overnight temperatures.

"We're not sure if he spent the night under the trailer," D'Evelyn said. "The paramedics thought he'd been moving for some time to avoid damage from exposure."

Searchers on the ground checked an area more than two miles wide around the grandmother's home, while searchers in the air, including Black Hawk helicopters with night vision who volunteered to help, covered a much larger area, D'Evelyn said.

The terrain in the area is rugged with low shrubs, lots of potential places to hide, and a number of abandoned buildings.

"As we've learned in the past, young kids can move quickly even over rough terrain," D'Evelyn said.

Even search dogs from the Department of Corrections, which arrived Saturday afternoon, had little success, according to D'Evelyn. "They picked up some scent not far from the grandmother's home, but the scent went cold near a road."

D'Evelyn said investigators were getting calls of sightings of Cole from all over the state.

"We had no obvious signs of foul play," he said. "We called the Child Abduction teams in so they were close in case we did need them."

Cole apparently wandered off from his grandmother's home to explore, but got lost.

According to detectives, this was the first time Cole had wandered off.

"He did say, 'I heard these helicopters and I was hoping they would rescue me,'" D'Evelyn said. "We'd been told he was afraid of loud noises and large animals, but that he liked policemen and people in uniform. When he saw the rescuers come by in their camouflage, he ran to them immediately."

Sheriff Scott Mascher, who participated in the search, spoke with Cole's family and shared his delight at Cole's return and thanked all the people who helped search for Cole.

"We threw everything we had at this search, every resource," D'Evelyn said. "When Cole walked out of the car at the command post, we were all so relieved."

There is no estimate yet on a cost for the search for Cole. That can take several days to calculate and a general estimate may be available in the coming days, D'Evelyn said.