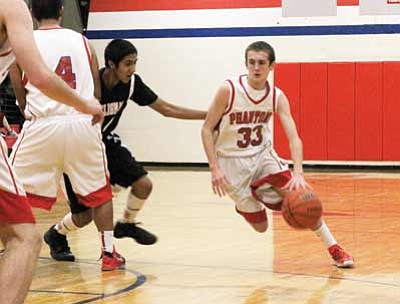 GRAND CANYON, Ariz. - The Grand Canyon Phantoms came back from winter break rested, yet focused with three straight wins in three days to improve their regular season record to 8-1 overall in games that count toward the Arizona power point rankings.

"We struggled with Seligman the first time we played them last year, and I know their record isn't that impressive, but we just needed to come out focused and ready to play our game and our style of basketball," said Grand Canyon boys head basketball coach David Beery. "And we really got going that game. Our point guard Justin Jarrell played really well, he ran the offense great."

Against Rock Point the Phantoms jumped out to an early 17-4 lead at the end of the first quarter, and pushed the lead all the way to 22 points at halftime, up 38-16 on the Cougars.

"Our first quarters have been very good as of late," Beery said, calling the Rock Point game the toughest game of the weekend from a mental standpoint.

"The officials really let them play, and our guys did a good job of keeping their composure even when things were getting a little chippy," Beery said. "There were a few times early in the season some guys would get caught up with the officiating but they did a good job of playing well in a hostile environment, they really had a great crowd there."

Rock Point outscored the Phantoms in the second half to battle back and try to make a game out of it, but the lead Grand Canyon built in the first half proved too much to overcome.

Even on their home court, Greyhills Academy (1-8) wasn't much competition against Grand Canyon, as the Phantoms dominated the Fightin' Knights right from the tip. Officials ran the clock continuously throughout the second half because of Grand Canyon's large lead, which eventually proved insurmountable.

"Greyhills is kind of on a down year, but I have to give them credit, they played really hard the entire game," said Beery. "It's hard to motivate kids sometimes when they're out of a game pretty early to keep playing hard."

Beery said the keys to the Phantoms' three straight victories in three days were a combination of a couple things. First, Bankston played well in every game and no team really had an answer for him. And second, the team has played great defense as of late. Beery said his team has been able to force a lot of turnovers, which in turn helps them get some easy baskets.

Next up for the Phantoms is a visit from the Scottsdale Preparatory Academy Spartans (11-3) tonight at 6 p.m. Grand Canyon faced Scottsdale Prep twice last year, losing the second game to the Spartans in overtime.

"They're going to give us a taste of a state playoff, they're a little bigger and a little deeper than most of the teams we usually see," Beery said. "Last year they were real physical, this will be a good test for us. Matt Munsil is one of several good players they have, he gave us a lot of trouble last year."

After Scottsdale Prep, the Phantoms hit the road for two straight games in as many days. Grand Canyon plays at Tuba City High School Friday at 7:30 p.m. and at Seligman High School Saturday at 7 p.m.

In other Grand Canyon basketball news, the girls' varsity basketball team lost 46-27 at home to the Seligman Antelopes on Jan. 3 and lost 44-23 at the Rock Point Cougars on Jan. 4. The slumping Lady Phantoms have lost three in a row.

The Lady Phantoms' overall regular season record now stands at 4-4 in games that count towards the Arizona power point rankings.

The Lady Phantoms play host to Scottsdale Preparatory Academy today at 4:30 p.m. Then they hit the road to play at Tuba City High School Friday at 6 p.m. and at Seligman High School Saturday at 5:30 p.m.