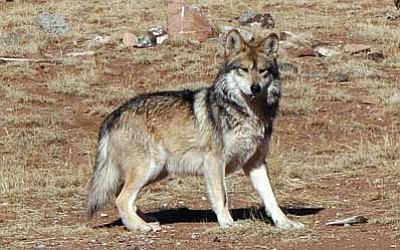 A Mexican gray wolf at the Sevilleta Wolf Management Facility in New Mexico in 2011. Efforts to reintroduce the animals in Arizona and New Mexico have met with limited success. There are currently just 58 in the wild in the two states. Photo/US Game and Fish

WASHINGTON - For the second time, a Tucson-based conservation group has sued the federal government over its handling of the Mexican gray wolf.

The Center for Biological Diversity filed suit early December in federal court in Washington, D.C., challenging an Oct. 9 Interior Department decision that denied a 2009 request to list Mexican gray wolves as a subspecies under the Endangered Species Act. Such a listing would let the subspecies, found in New Mexico and Arizona, continue to be protected even as the larger gray wolf species is taken off the list.

It comes just days after the center filed another suit, on Nov. 28, against Interior and the U.S. Fish and Wildlife Service over the wolves Fewer than 60 of the animals were counted in Arizona and New Mexico this year.

"They're (the lawsuits) interrelated as Fish and Wildlife is using the excuse of not finishing one project, as the excuse for not finishing another project," said Michael Robinson, a conservation advocate with the center.

Calls to the Interior Department and Fish and Wildlife Service seeking comment were not immediately returned as this story went to press. But when the center sued last November, officials with those agencies declined comment, either because they had not seen the suit or it was ongoing litigation.

The suit charged that the service had said on Aug. 4, 2010, that listing the Mexican gray wolf as a subspecies "may be warranted," but then reversed itself this October.

It's not the first time the service has changed its position on the status of the Mexican gray wolf. It was listed as a subspecies starting in 1976, but in 1978 the service consolidated all gray wolf subspecies into one endangered species listing in all of the lower 48 states except Minnesota, Robinson said.

"We petitioned in 2009 to get the Mexican wolf on the list as its own entity and just this fall they rejected that petition," he said. "The Fish and Wildlife Service has essentially stalled at every turn about doing anything affirmative to help the Mexican gray wolf, which is slipping toward extinction.

Through that recovery program, captive-raised Mexican gray wolves were released into the wild in 1998. But the November suit said that the government failed to act on recommendations to assist the recovery program.

"In 2004 we petitioned for reforms in the reintroduction plan that scientists had advised," Robinson said. "We are suing on that over eight years later because those reforms were never implemented."

A population count last January estimated that only 58 Mexican wolves were alive in the Southwest. Scientists say that makes the genetic pool dangerously shallow and that Mexican gray wolves may be suffering from inbreeding as a result.

"That is causing lower litter sizes among pups born in the wild, and among the pups fewer of them are surviving to adulthood," Robinson said. He said that without more wolves and more genetic diversity, eventually there might not be a way for the population to recover.

"We don't want to look back in 10 years and wonder if there was anything else we could have done to save them," Robinson said.