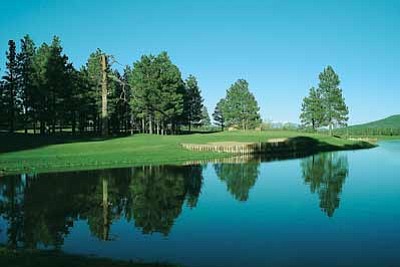 These missed opportunities included failing to maximize revenue through accommodating people's food and beverage and event needs. Buchanan said they resulted in the golf course "not living up to its potential."

Buchanan said that through personal observations and talking to community members, he discovered some problems with management at the course regarding maximizing golfer turnout and revenue.

"I'll admit I'm not a golfer but I do understand running a business," he said.

Buchanan also said marketing and promotion efforts within Williams and Arizona were lackluster and communication with those interested in using the course was minimal.

"That effort wasn't getting put in, in my opinion," Buchanan said.

Buchanan discussed his concerns with Redman at the start of the season in February or March of 2012. He said that while Redman addressed most of the concerns at the time, "the ones that were addressed crept back up throughout the season."

Because the issues persisted, Buchanan brought up the matter with council members.

"(The golf course) is a business and it is there to make money, so any of those lost revenue opportunities are a problem for us," Buchanan said, adding that the city will need that revenue in the future to replace old golf course equipment.

Buchanan knows what he will be looking for in a new manager.

"I hope to see the parts of the business that have been neglected over the past few years be emphasized," he said.

Buchanan added he hopes to see more events, such as weddings and golf tournaments. He would also like an expanded food and beverage service, to possibly include dinner, so non-golfers could enjoy the scenery at the course.

"We have an amazingly beautiful setting up there at the club house," he said.

Buchanan said that he, along with the city council, golf committee and city staff involved with the golf course will work together to find new management although they have not decided how they will conduct the search.

"We really need a solution that works for everybody," he said.