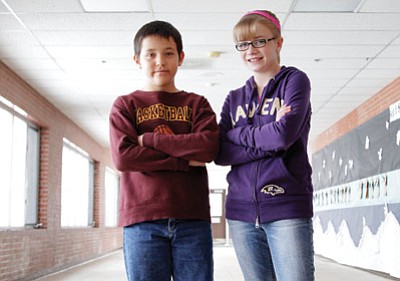 Williams Elementary-Middle School (WEMS) fifth-grader Isaiah Quiriarte and seventh-grader Rylie Heap stand at the ready prior to the Coconino County Spelling Bee. The two came out on top in the WEMS bee earlier this month. Ryan Williams/WGCN

Both students had competed in WEMS spelling bees in the past.

The students were pleased to win.

"I was really glad," Isaiah said.

"I was just relieved," she said. "I have stage fright, so it's hard getting up there."

After winning the WEMS spelling bees, the two students advanced to the Coconino County Spelling Bee, where as many as 24 spellers from public, charter, private and home instructed schools competed.

Rylie had competed in the county spelling bee a few years ago. Last time, she got to the second round. Her goal this year was to make it to the third round.

Both students said they were excited but nervous to be competing at the county level.

To prepare for the county spelling bee, Isaiah said he studied words from the dictionary.

Rylie said she studied a packet she got from the school's spelling bee coordinator, Mary Mays.

"It's a whole bunch of words and it's sorted out in origin," Rylie said, adding that her brother helped her study.

Mays said she was proud of the students for making it to the county spelling bee.

"I think it's an accomplishment they were able to win the spelling bee here," she said.

The winner of the state spelling bee will represent Arizona at the Scripps National Spelling Bee in Washington, D.C. from May 26 to June 1.